Bash Squale is a shark man of the kind of people it is better not to tickle, and recurring antagonist in the French animated TV series Dofus: Kerub's Bazaar.

Once a pirate of legend, terror of the seas of the World of Twelve, he is now the patron saint of a quiet tavern in the center of Astrub. But Bash Squale has lost nothing of its bite, especially with respect to Kerubim Crepin. Formerly, they were the best friends of the world with Kerubim. For a mysterious reason, the shark-man today has a tooth against Kerubim and she is sharp

Then childhood passed and everyone went to live adventures on his side. Bashi has become a dreaded hijacker and Kerubim has temporarily abandoned the adventure to become a kind of diplomat who peacefully negotiates conflict resolution.

Debuted in episode with the same name, it turns out that in reality Helen was not abducted, she left of her own accord because she is in love with Bashi. Kerubim is very happy for his friend because he knows how much his love life was strewn with rejections and disappointments, it is partly for this reason that he became so embittered and so violent. Having no intention of depriving his friend of the woman he loves, Kerubim proposes a peaceful solution. Kerubim is quick to understand that she is not in her normal state, wears a shushed collar, and the demon it contains influences her character. Bashi destroys the Admiral's fleet and his own in a fit of rage. This disaster marked the end of Kerubim's negotiating career.

If Helen agrees openly to tell the Admiral that she does not love him anymore and wants to live with Bashi, the Admiral will have no reason to insist on recovering her, which will prevent a deadly naval conflict. 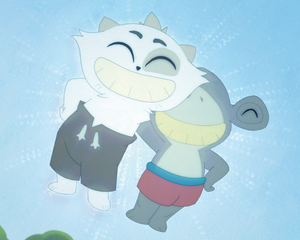 Bash and Kerub as best friends in past memories.