Basil Karlo is a supporting antagonist in the TV series Gotham.

One of the monsters created by Hugo Strange, Karlo is able to shape-shift his body into any person he can think of. Thus far, Karlo has been a minor villain and has used his powers of impersonating people to manipulate others. It appears that after his escape from Arkham Asylum, Karlo has started to sell his services - most notably when Barbara Kean's criminal group hires him to haunt Oswald Cobblepot in the shape of his dead father.

He was portrayed by Brian McManamon, Ben McKenzie (as Jim Gordon) and Paul Reubens (as Elijah Van Dahl).

Karlo was experimented on by Hugo Strange at Indian Hill. He is the seventh subject of Strange to be awoken. Once awakening, Karlo is deeply disturbed by his new condition, as well as by the fact that his skin is extremely stretchable.

Later, having calmed down, Karlo is used by Hugo Strange who has captured James Gordon. Aware that the police is coming for him, Strange uses Karlo to tip the odds in his favor. Karlo makes use of his new abilities and changes his voice as well as his face and creates a perfect copy of Gordon, much to the horror of the real Jim.

When a GCPD SWAT team storms Arkham to free Gordon, they are greeted by Basil who imposes Jim. Although the SWAT leader finds Gordon somehow off, they accept "Jim" without further questions. At the GCPD, Bullock is surprised when Karlo tells him that Strange cannot be touched due to his connections. Bullock is also startled by Jim's weird behavior but Karlo passes it off as a flu. However, when Alfred arrives at the GCPD and demands to know why Bruce has not returned from Arkham, Basil responds very abnormally for Gordon, and Alfred and Bullock seem to notice. The disguise crumbles even more when Barbara Kean appears at the GCPD and Karlo absolutely falls for her charms. Barbara immediately realizes that Karlo is not Jim when he talks of Leslie Thompkins as 'water under the bridge'. She slaps Karlo, whose face temporarily transforms for all the GCPD to see. He is then arrested and incarcerated at the GCPD holding cells.

Karlo evaded capture somehow. Months later, he is approached by Tabitha Galavan, Barbara Kean and Edward Nygma who employ him to portray Elijah van Dahl, the deceased father of Oswald Cobblepot. Karlo accepts and haunts Oswald as the ghost of Elijah. This mental torture eventually causes Oswald to panic on live television, creating the exact reaction the trio wanted to create.

After Oswald's breakdown on television, Karlo leaves City Hall and meets with Nygma, Barbara and Tabitha who congratulate him on his performance. Although quite happy with himself, Karlo remarks that he did not get the voice quite right.

Following the deaths of two former police officers at the hands of Jane Doe, a former Indian Hill patient with similar but more complex shapeshifting powers, Bullock suggested Basil as a potential main suspect, though Gordon dismissed this idea. 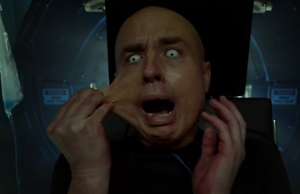 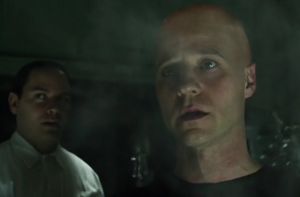 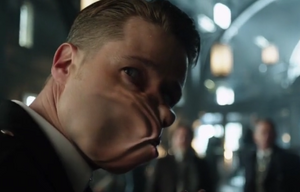 The fraud is revealed. 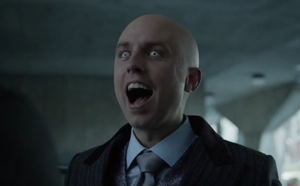