Leaving trail of poisons wherever it goes.

The Basilisk is a legendary serpent closely related to the Cockatrice and believed to be inspired by varied snake species found in the world. It was considered a "king" of the serpents and had the frightening ability to kill with a single glance, known as petrification.

The Basilisk is also said to be so incredibly poisonous and deadly that it leaves behind a burning trail of venom everywhere it goes, and indeed, this is how one could identity a Basilisk's hole, due to the ground being scorched around it.

The only way folklore said that the Basilisk could be harmed or driven away was via the odor of a weasel, presumably due to the fact weasels are natural predators of lizards and snakes (especially the mongoose).

The folklore of many cultures have each given a different aspect of the Basilisk. His most popular form comes from the Greek culture, who named it Basilicus Regulus. This Basilisk was a one-foot long snake with a white spot and three growths on a pointed head.

Others cultures give him the head, the neck and the legs of a rooster, because they say he came out of a rooster's egg hatched by a toad. Finally, it can be seen, on some monuments, with grasshopper or butterfly wings. In the imagery of the Middle Age, he's represented with the head, neck and chest of the rooster, the body of the snake and eight legs.

The Basilisk was said to be the most venomous of snakes. He can cause, in one second, an instant death. His breath was not only deadly for all life, but can literally broke stones. His breath was enough to make suffocate any life; no plant could vegetate around its lair; and the remains of his preys, hanging in a temple, preserved it from spider webs and swallows' nests.

An human who inadvertently meet it would feel himself penetrated by a sudden fire and would perish in the midst of torments.  The ancient Basilisk from the oldest Greek authors (including Aristotle)  threw fire and death through his eyes, and with such violence that, even when he set a mirror against him, the reflection of his own gaze immediately made him perish.

This monster, however, feared weasels, probably because weasels are snake's predators. But his greatest fear was the morning song of the rooster because the Basilisk came apparently from an egg of decrepate's rooster. Also, if a man saw him first, he had nothing to fear from him. 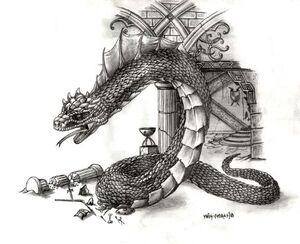 A serpentine version of the Basilisk. 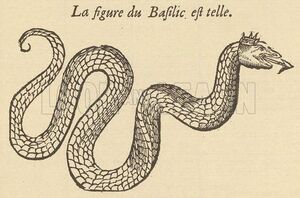 A medival artwork of the Basilisk. 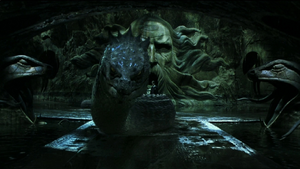 The Basilisk as seen in Harry Potter and the Chamber of Secrets.