Villains Wiki
Register
Don't have an account?
Sign In
Advertisement
in: Infobox Update, Categories Needed, Fist of the North Star Villains,
and 8 more

Bask (Fist of the North Star)

Bask (in Japanese: バスク, Basuku) is a minor antagonist in Fist of the North Star. He serves Jakoh as an area governor for the Celestial Empire.

He was voiced by Masaru Ikeda.

As the execution is about to begin, Bask plans to identify the woman as Lin and make the anti-Celestial forces kneel before them.

However, Kenshiro arrives on Kokuoh to save the hostage and announces to Bask he had arrived from the north to kill him. The governor realizes it was Kenshiro who had been wrecking the Celestial districts one-by-one. After Barona is killed, Bask decides to engage Kenshiro using the Kazan Gokuaku So technique. He winds up hitting a pillar on the first try. On the second, Kenshiro entagled the villain up before using a series of punches before finishing with a hard finger press on the forehead.

Bask asks in a panic who Kenshiro is. He simply replies that he's a common man, before Bask is bisected in two.

Bask uses the Kazan Gokuaku So to drill into his opponents. 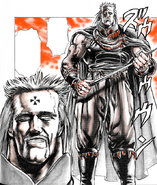