Have the Titans dominate the Earth Sphere.

Colonel Bask Om is the secondary antagonist of Mobile Suit Zeta Gundam, as well as a minor antagonist in Mobile Suit Gundam 0083: Stardust Memory. He is the field commander of the Titans and second-in-command to Titans leader Jamitov Hymem, who uses his position to commit genocide against Spacenoids.

He is voiced by the late Daisuke Gōri in Japanese and by Noah Umholtz in the English dub.

Bask is seen in charge of the Federal Forces' control ship of the Solar System II. Ironically, in failing to stop the Delaz Fleet's colony drop while manning the Solar System II superweapon, Bask had a hand in forging his future posting in the Titans. Arguably, he and Jamitov Hymem were the characters who most benefited from Operation Stardust; their enemies in the Zeon remnants were dead and the tragedy gave Bask and Jamitov the political support to create the Titans.

Throughout his tenure, Bask shamelessly orders his subordinates to commit mass murder by gassing entire colonies or firing the Titans' deadly super-weapon, the Gryps 2 colony laser. He also used Kamille Bidan's parents as hostages in order to convince the AEUG to return the Gundam Mk-II prototypes that they stole from the Titans' headquarters at Green Noa II. This particular deed resulted in the death of Kamille's mother, Hilda Bidan, at the hands of Jerid Messa. Disgusted by Bask's action, Titan pilot Emma Sheen helped Kamille and his father Franklin escape by giving them pilot suits so that the three of them could commandeer the Mk-II prototypes and take them back to the AEUG.

Upon returning to the Argama, Reccoa Londe told Emma all about the Colony 30 incident, where Bask killed off the entire population with G-3 poison gas in order to end an anti-Earth rally. Ironically, Bask sends Reccoa out to lead a mission to gas another colony later on in order to prove her loyalty to the Titans after defecting from the AEUG. Much to her dismay, the AEUG fail to show up in time in order to stop them and Reccoa reluctantly carries out Bask's orders.

After the death of Jamitov Hymem at the hands of Paptimus Scirocco, Bask stood as the only obstacle preventing the latter from acquiring complete control over the Titans. He ultimately met his end when Reccoa and several other minions of Scirocco attacked his ship, the Dogosse Giar, while they were executing a mission with Rosamia Badam piloting the MRX-010 Psyco Gundam Mk-II. Due to all the confusion, Bask and his men were easily overwhelmed and defeated when Reccoa destroyed the Dogosse Giar with a direct shot at the bridge, killing Bask.

In the movie trilogy, Bask was killed by Yazan Gable instead of Reccoa during the battle between AEUG, Titans and Axis.

Bask Om is primarily characterized by his deep xenophobia towards Spacenoids and favoritism towards employing aggressive tactics in order to suppress dissent, be it violent or peaceful. Having, by some accounts, spent much of the One Year War in a Zeon P.O.W. camp, Bask holds a virulent hatred of all Spacenoids, not just Zeon sympathizers, and frequently abuses his position to murder as many of them as possible. He does not take kindly to those below them questioning his orders, and often reacts violently when officers below him do so, in one case beating up EFF Commander Bright Noa for criticizing an order he gave that risked civilian lives. Though the stated mission of the Titans is to safeguard Earth by taking out Zeon insurgents and other threats in space, Bask cares little for the innocent lives that are caught in the crossfire of his actions, be they Earthnoid or Spacenoid, and delights in ordering his men to commit atrocities. He has no compunction about using destructive or underhanded tactics, such as gassing entire colonies or holding someone's family hostage against them, in order to achieve his goals and assert his power. Occasionally, Bask will order his subordinates to commit such horrific acts as a test of loyalty, such as when he commanded AEUG defector Reccoa Londe to gas an entire colony as a way of showing her commitment to the Titans. Ironically, Bask's totalitarianism and war crimes make him little better than Zeon's ruler Gihren Zabi, even though Zeon was the very thing the Titans were created to fight against. 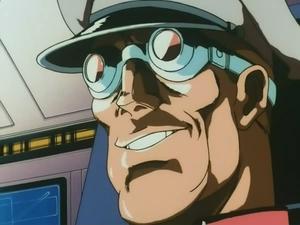 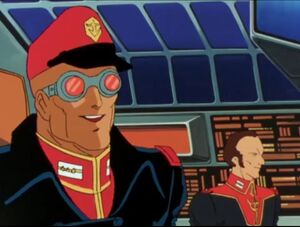 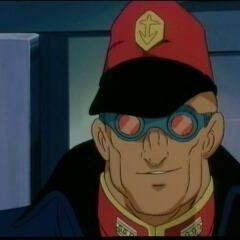 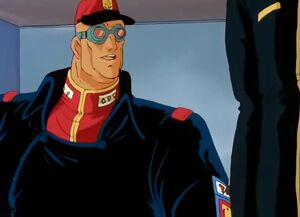 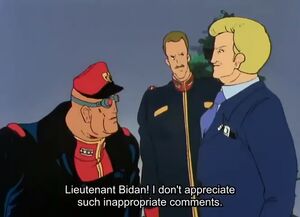 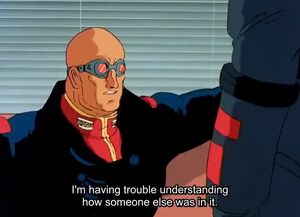 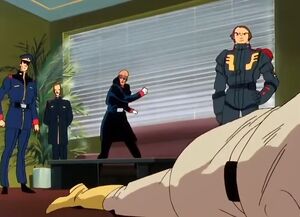 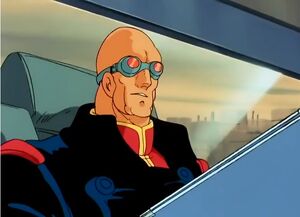 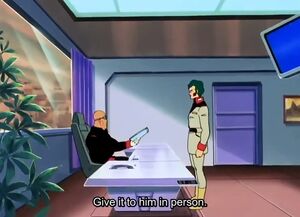 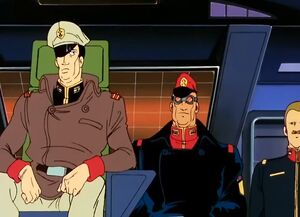 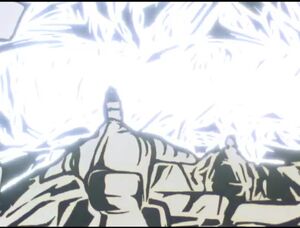 Bask's demise in the TV series 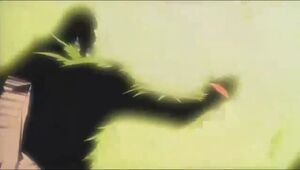 Bask's demise at the hands of Yazan in the movie version.