Bassdrum is the de facto leader of Trio de Minor, and will do anything in his power to make sure that he keeps his status. Trio de Minor is a team organized by Mephisto to gather the notes to complete the Melody of Sorrow. Like most other people from Minor Land he can't stand happy music and cringes at the sound of it.

Bassdrum is deceptive, opprobrious, arrogant, greedy, rude, cunning, and manipulative, so he probably has the largest superiority complex of his team. He is constantly obsessed with being the leader of the group, and while he is good with coming up with several tactics, schemes and plans to beat the Precure, his haughtiness almost always causes him to overlook several details and his efforts end in no avail.

Bassdrum, along with the rest of the trio, were once the three musketeers that protected Major Land in the past, until they were controlled by Noise. Upon failing he witnessed Hibiki and Kanade's transformation into Cure Melody and Rhythm, respectively. He started to taunt and tease at their failure to defeat the Negatone because their Harmony Power was out of sync. It wasn't until episode 10, where he got a major plot. After being saved by Ouji, Siren began understand human emotions. Bassdrum became aware of this and reported this Mephisto.

When Cure Muse first appeared he speculated it was Siren because she strangely left every night coming back at dawn. She was very secret about her "departures" and refused to tell anyone where she was going. However it revealed she is not Cure Muse because Muse saved Pretty Cure from Siren herself in episode 13. After Siren's permanent departure Bassdrum acclaimed the leader position. In episode 21, he planned to have a large concert in Kanon to play the Melody of Sorrow. The plan failed great thanks to Cure Beat's debut.

In episode 26, Mephisto gives everyone in Trio the Minor new powers using his special earphones. Bassdrum's sense of smell has been greatly enhanced, as he can smell a note from far away.

His beard and hair are now more wild, spiking up at the tips. He now has purple markings on his face around his eyes, which resemble two halves of a heart. Bassdrum now has a tight green top, gray, bone-like armor on his shoulders, a red gem on his chest, and dark green pants. He is shown to be extremely buff, though it is unknown if he had these before his power-up.

He grows immensely and takes on a new, amphibious appearance. He wears the same outfit, but his hair is more wild and spiked at the tips. 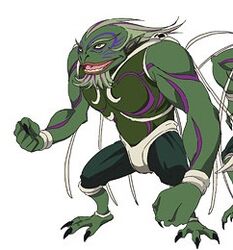 Bassdrum's final form.
Add a photo to this gallery
Retrieved from "https://villains.fandom.com/wiki/Bassdrum?oldid=3371920"
Community content is available under CC-BY-SA unless otherwise noted.