Bat is a winged restless mammal who is a resident of Africa in the animated African-British TV series, Tinga Tinga Tales.

Why Bat Hangs Upside Down

When Red wakes up Bushbaby, Bat flies up and scares them. Bat continues to scare many animals he sees. He talks to himself that nothing is able to scare him, including thunder. The animals are panicking that they must report to Lion on what is going on with Bat. Bat flies up on the full moon and continues scaring everyone until Lion shows up. Lion says that Bat isn't scared of the thunder. Lion commands all the animals to create thunder. First, the zebras and antelopes stamp their hooves on the ground for rumbling. Next, the flamingos and birds use their wings to the beat like the wind (Wind is absent in this episode). Later on, Elephant drinks water and shoots from his trunk like rain. Buffalo and his mate crash into each other to make the sound of thunder. Finally, Bat is scared of the thunder. Bat returns to his cave and usually hangs upside down like an actual bat. Bushbaby walks up to him and is afraid of him. This is why Bat is taught a lesson as manners.

Lion explains to Red what he learned on the Story of Bat. Red explains to him that it is impolite to scare animals. 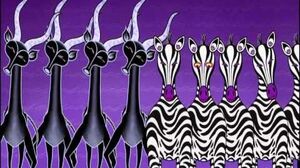 Why Bat Hangs Upside Down
Add a photo to this gallery
Retrieved from "https://villains.fandom.com/wiki/Bat?oldid=2304850"
Community content is available under CC-BY-SA unless otherwise noted.