Tormenting the people she haunts and the spirits from her former possessions.

Kill Carolyn and her family.

Epel undesirables from her estate.
Possess women and sacrifice their children for the Devil.

Bathsheba Sherman is the evil spectre of an 1800's devil worshipper and witch, and is the main antagonist of the 2013 horror film The Conjuring, based on the "true" story of the Haunting in Harrisville, Rhode Island.

Despite being a female, she was portrayed by Joseph Bishara, who also played the Lipstick-Face Demon in Insidious, and the demon in the prequel film Annabelle.

Bathsheba Sherman (born Thayer) was born in 1812 and was claimed to have been related to Mary Towne Eastey, one of the many executed for witchcraft in the Salem Witch Trials of 1692.

51 years later in 1863, Bathsheba married a rich farmer under the surname "Sherman" and gave birth to a child. When he was a week old, her husband caught her attempting to sacrifice her baby to the Devil. Exposed, Bathsheba climbed to the top of a tree, proclaimed her love for Satan, and cursed all those who would take her land. Bathsheba then hung herself, committing suicide.

Bathsheba's spirit continued to reside in the land, haunting her former homestead. True to her curse, Bathsheba would haunt the families that would move into her house. Bathsheba would torment the family continually, and finally possess the family's mother to kill the children before forcing the mothers to commit suicide. The spirits of Bathsheba's victims continued to reside in the house, along with her, living in constant fear of her curse.

108 years later in 1971, Roger and Carolyn Perron move into Bathsheba's house with their five daughters Andrea, Nancy, Christine, Cindy and April, resulting in Bathsheba turning their attention to haunting them in retaliation for taking her land. Sadie, the family dog, senses the presence of the spirits in the house and refuses to enter. Bathsheba soon kills the dog.

For the next several nights, the Perrons experience multiple paranormal events as a result of Bathsheba and the other spirits. Though the other spirits wish no harm towards the family and only unintentionally invoke fear towards them, Bathsheba intentionally torments them, removing furniture and causing all the clocks in the house to stop at 3:07 AM, the devil's hour. One night, Bathsheba tugs on Christine's leg and reveals herself to her, prompting Christine to deduce that Bathsheba wants the family dead. At night, Carolyn is distracted by one of the other spirits in the house, to which Bathsheba uses the distraction to attack Andrea and Cindy. However, she vanishes when the parents investigate.

The Perrons contact paranormal investigators Ed and Lorraine Warren to investigate the house. Lorraine notices Bathsheba's presence in the house, even seeing an apparition of her hanging corpse on the branch she hung herself on. The Warrens claim that Bathsheba has latched herself onto the family and that the house may require an exorcism, though they need permission from the Catholic Church and further evidence before they proceed with this.

As the Warrens continue to investigate the house, they discover Bathsheba's history prior to her suicide. As the Warrens investigate, Bathsheba possesses Carolyn. Shortly afterwards, Lorraine is lured into a secret passage by the other spirits, who reveal that Bathsheba had forced them to kill their children. Bathsheba arrives in the passage and attacks Lorraine, who flees the cellar and reveals Bathsheba's purpose of possessing mothers and having them kill their children. Immediately afterwards, Bathsheba flings Nancy around the room by her hair, forcing Lorraine to lacerate her hair.

The Perron family take refuge in a hotel while the Warrens take their evidence to the Catholic Church to authorize an exorcism. Bathsheba, enraged at the Warren's interference, enters their own house and frees Annabelle, a demonic-possessed doll, and the two attack the Warrens' daughter Judy. The two spirits nearly kill Judy, but Ed manages to save her. Annabelle is returned to her cell while Bathsheba returns to the Perron family to enact the sacrifice.

After subduing the possessed Carolyn, the Warrens tie her to a chair and conduct the exorcism. During the exorcism, Bathsheba finally reveals herself to those present, and manages to break free of her binds. Roger becomes enraged and demands that Bathsheba releases his wife, but Bathsheba turns to him, telling him that Carolyn is "already gone" and that she would kill them all, Bathsheba then tried to shoot Ed with the shotgun the shotgun left near the wall by the cop helping them, but Roger saves him. One of the Warrens' assistants unwittingly revealed April's hiding spot, and Bathsheba immediately advanced under the floorboards and captured April. As she attempted to stab her, Ed finally confronted Bathsheba and condemned the spirit to Hell. Lorraine manages to distract the possessed Carolyn by reminding her of a memory she shared with her family, allowing Ed to complete the exorcism. As a result, Bathsheba was banished from the family and condemned to Hell.

Very malevolent, sadistic, unpleasant, temperamental and murderous, Bathsheba is the most dangerous spirit in the Perron household. Whereas the other spirits were heavily tormented and wracked with guilt after their actions as a result of Bathsheba's influence, Bathsheba is bloodthirsty, unsympathetic, remorseless, uncaring, and cruel. She is very vengeful and retaliatory, targeting any family that would take her land, and also when the Warrens were investigating the household, leading Bathsheba to attempt to murder their daughter. She is also an enthusiastic and fanatical follower of Satanism, which led her to sacrifice her own child to Satan and was willing to die for her twisted beliefs.

Bathsheba appears to have some knowledge of events transpiring outside of her homestead, as she was aware of the deadly Annabelle doll and the demon possessing it (which is led to be a demon named Annabelle Higgins). She also shows an ability to cooperate with the demon, as the two briefly collaborated in an attempt to murder Judy. 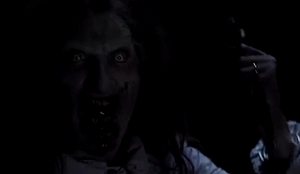 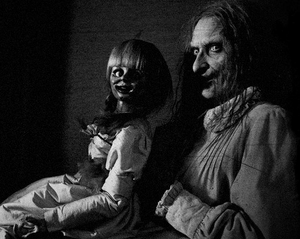 Bathsheba screams at Ed, prior to being exorcised.

Bathsheba on the wardrobe 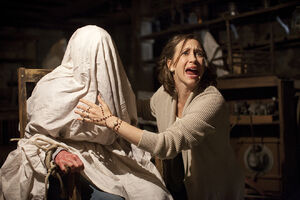 Bathsheba, having possessed Carolyn, is restrained in a chair while Lorraine is very scared. 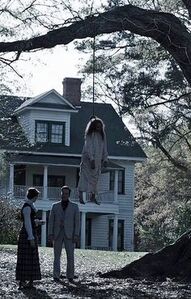 Bathsheba's corpse
Add a photo to this gallery 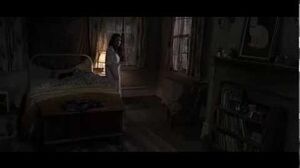 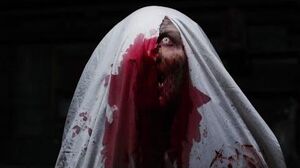 The Conjuring Exorcism Scene
Add a photo to this gallery

Retrieved from "https://villains.fandom.com/wiki/Bathsheba_Sherman?oldid=2808961"
Community content is available under CC-BY-SA unless otherwise noted.