Bathysfear is a minor antagonist in Dragon Quest XI. He is an undersea fighter who claims to rule over the seas and steals Queen Marina's Pearl of Wisdom to assert this point.

He is voiced by Daichi Endo in the Japanese version, and by Jamie Ballard in the English version.

After the rebirth of Calasmos, Bathsyfear is released and stole Queen Marina's Pearl of Wisdom. The mermaid queen then request the Luminary and his party to help her reclaim it. After they sails to the Northeast part of the ocean, where an island that is not shown on map appears. Bathsyfear emerges from the water and correctly assumes that they came here to reclaim the pearl. Bathsyfear then attacked them, but is destroyed for good.

Just like Indignus, Bathsyfear is another recoloured Nokturnus that is light blue in colour and has the characteristic green eyes of malicious monsters. Contrary to the former, however, he wears the classic helmet not the dragon-styled one. 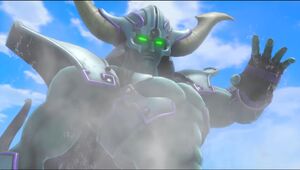 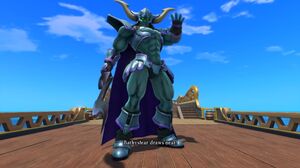 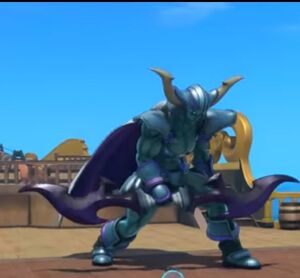