Fighting crime in his own way.

Humiliating members of the Justice League.
Abusing Robin and anybody who disagrees with him.

Defeat villains by his own plans no matter what the cost (ongoing).

Defeat The Joker and Superman.
Fake his own death to make the US government cease its manhunt on him.
Finish off with the threat of Lex Luthor and Dick Grayson (all succeeded).

In the animated adaptations of Year One and The Dark Knight Returns, Miller's Batman was voiced respectively by Ben McKenzie and Peter Weller, who also played John Frederick Paxton in Star Trek: Enterprise, Alexander Marcus in Star Trek Into Darkness, Mr. Yin in Psych, Stan Liddy in Dexter and Caleb Thies in Call of Duty: Infinite Warfare.

In what is said to be the canonical start of all of Frank Miller's Batman works following Batman: Year One, Bruce Wayne first appears to watch the performance of Dick Grayson, age 12, and his family with a particularly creepy focus on Dick. When Grayson's parents are murdered, Batman abducts Dick against his will, saying he has been "drafted into a war", and takes him into the Batmobile. When the police give chase, Batman violently rams the Batmobile through their cars, splitting one in half.

He rationalizes his actions by saying the police are corrupt. He also hits Dick when the child understandably cries out of fear. Although Batman briefly questions his own actions, he nevertheless keeps Dick as a prisoner. At the Batcave, Batman shows a childlike annoyance in Dick's lack of wonder at the sight of the Batcave and leaves him there. When asked what he should do, Batman simply tells Dick to survive on his own and eat at the rats that show up. Batman's butler Alfred Pennyworth becomes concerned for the child and gives him food and warm clothes; Batman reprimands Alfred for "interfering".

They eventually capture the killer of Dick's parents and find that he had been hired by The Joker, and then dump the killer in a river. During one of their rounds, Batman lures Green Lantern and beats up the superhero with no provocation in a room full of yellow, which he cannot use his ring's powers against. Green Lantern argues against the cruel and unsavory methods Batman employs, only to be mocked by Batman and urged into a fight when Robin steals his ring. However, Batman shows an uncharacteristic humanity when he stops Dick from killing Green Lantern, and they later shares a moment of grief for their respective parents in a graveyard. Nevertheless, he still retains Grayson as Robin.

In the years following the events of The Dark Knight Returns, Batman returns to action to enact against the tyranny of Lex Luthor. However, his actions are more in line with those of a terrorist than a superhero. In his instance of attacking and taking down Luthor, he does not stop the villain right there, instead preferring to rely on terrorist acts (most notably mutilating Luthor's face with a massive "Z"). He then puts on Kryptonite-laced gloves and gives Superman a savage beating. While Superman is forced by Luthor and Brainiac to work for them to defend the city of Kandor, Batman shows very little mercy to his former ally, instead using the opportunity to just beat up Superman while hypocritically declaring the superiority of heroes without superpowers.

He also encourages a group of young women dressed as superheroes called The Superchix to rebel, resulting in their deaths for a completely pointless act, likely his Moral Event Horizon-crossing act. He also pulls another MEH-worthy action in having the heroes hold back when many civilians are murdered and injured by a Brainiac-conjured monster. While he does recognize it as a trap, he still prefers to let millions die just to ensure his plan works, an action very uncharacteristic of the usual Batman. When he finally gets to Luthor, Batman allows himself to be captured and tortured, only to set up Luthor to be caught by Hawkman and Hawkgirl's son. In another very uncharacteristic act for Batman, he encourages their son to get revenge on Luthor, leading to the villain's horrific death. When Flash questions this action, Batman silences him.

At the end, he goes to rescue his new Robin-turned-Catgirl Carrie from a superhero-killing Joker-esque shapeshifter that is revealed to be none other than Dick Grayson. Grayson reveals past affections for Batman, to which Batman taunts with disturbingly homophobic slurs while also noting that he was useless and pathetic (which definitely takes a darker overtone when one considers All-Star Batman and Robin, the Boy Wonder). Batman ultimately kills Grayson by knocking him into a volcanic center below the Bat Cave after being saved by Superman yet expresses some regret for having to do it. By taking the previous narrative into consideration, this is the tragic and disturbing result of Batman's abuse of Grayson, which might have even been sexual as well as physical and emotional. Nevertheless, Batman once again shows a somewhat human side by his apparent care for Carrie, although some have interpreted this as implying creepy wife husbandry at work - although Carrie shows none of the resentment towards Batman as Grayson does here.

Batman also presents another disturbing side to his character in the arc involving Superman and his daughter, who questions why they, as Kryptonians, should just not use their power to rule over those on Earth. Superman argues that such a thing would be wrong, until Batman steps in and actually mocks Superman for not taking advantage of his powers to accomplish such a goal, possibly showing that he doesn't care for humanity's welfare (yet it could be in part that he along with most members of the Justice League of America were banned by the government from continue their heroic activities).

This version of Batman is pretty much the complete opposite of any trait associated with the classic Batman; whereas the original Batman adhered to a strict moral code, this Batman is a violent psychopath It is clear through the story that this Batman is mentally sick, as he tends to overreact to nearly everything with extreme violence, even the smallest sign of provocation. He exhibits a childish personality, getting mad at Dick Grayson because the child didn't think the batcave was "cool" and is completely abusive towards everyone who crosses his way, even his butler, Alfred, and Black Canary, whom Batman forms an abusive relationship with (ironically, as Black Canary was depicted as hating men due to them being extremely disrespectful to her for being an attractive woman). He also presents a disturbed obsession with Dick, which is shown by the fact that he spied on the kid for months before his parents were murdered and immediately kidnapped the boy to force him to fight crime without a care for the boy's opinion. He lacks empathy and codes, as he brutally killed numerous criminals he encountered(including police officers), and also had no problem forcing the 12 year old Dick to eat rats and bats to survive alone in a cave, as well as tricking and brutally beating up Green Lantern just because the hero didn't agree with his methods; he even physically threatened Alfred for providing Dick with proper food. He was willing to leave millions of innocent people to die just to complete his plans and taking no responsibilities for his acts, as he repeatedly berates Dick for coming into his life and making his job more difficult, while ignoring that he was the one who abducted the boy against his will to fight crime.

However, this Batman isn't completely lacking in morals, as he stopped an enraged Dick Grayson from killing the beaten and defenseless Green Lantern, as well showing some signs of regret for his treatment of Grayson; he's shown to care about Carrie and is not seen as abusive towards her as he was towards Dick. As Batman is already a mature man in his mid-50s by the time Carie takes the mantle of Robin, it might be possible that within the years, he may have softened and become a better crimefighting crusader than he was when he started, yet the Lex Luthor/Dick Grayson incident causes him to temporarily revert back to his younger self. However, even so, he expressed remorse by having to get Grayson killed, possibly implying that he regretted his previous treatment towards him and that he felt a fatherly bond towards him as in Carrie's case (having been confirmed by Frank Miller that as Carrie sees him as the paternal figure she never had, Batman most likely sees her as the daughter he never had as well). 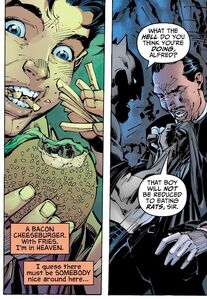 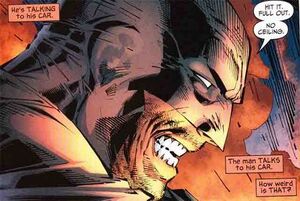 Batman talking to his batmobile. 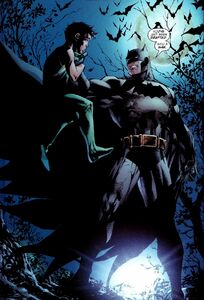 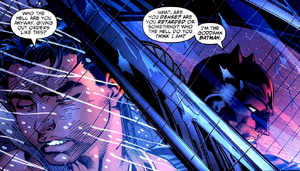 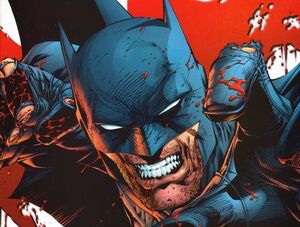 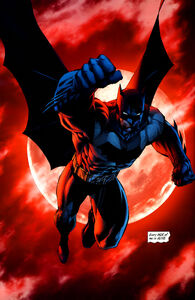