NOTE: This article is about the incarnation of Georges Batroc from the Marvel Cinematic film series. The mainstream version can be found here: Batroc the Leaper.

Batroc the Leaper (Only by fans)

Member of the DGSE (formerly)
Terrorist
Leader of the LAF
Mercenary

Georges Batroc is a recurring antagonist in the Marvel Cinematic Universe, serving as the opening antagonist of the 2014 film Captain America: The Winter Soldier and the secondary antagonist of the 2021 Disney+ series The Falcon and the Winter Soldier. A variant of him also appears as a minor antagonist in "What If... The Watcher Broke His Oath", the Season 1 finale of the Marvel animated anthology series What If...?. Over time he becomes Falcon's archenemy, who later becomes Captain America.

He is a wanted mercenary and terrorist for hire, who was hired by Nick Fury to hijack the Lemurian Star, before he was captured by S.H.I.E.L.D. Years later, Batroc is hired by Sharon Carter/Power Broker to spy on Flag-Smasher, allowing her to track down and kill the rogue super soldier.

He was portrayed by Canadian former professional MMA fighter Georges St-Pierre in his first villainous role.

Georges Batroc is a destructive mercenary willing to kill for money. He follows orders and is authoritative to his subordinates but he doesn't like to be kept waiting and is bloodthirsty and treacherous. Batroc is known for his maximum casualties and revels in the challenge of combat.

Batroc was paid by Nick Fury to lead a team of 25 pirates (including Gerald Durand and Ferdinand Lopez) to hijack and attempt to ransom a S.H.I.E.L.D. mobile satellite launch platform ship, the Lemurian Star, in order to gain information of Project Insight. S.H.I.E.L.D. then sends a task group, including Captain America, Natasha Romanoff and Brock Rumlow to capture Batroc and get back the ship.

After landing undetected, Captain America proceeds to take out Batroc's men, eventually aided by Rumlow and Romanoff. While they are busy, Batroc is awaiting the delivery of the ransom at the ship's bridge.

After his men have been defeated, Batroc grows anxious when no one responds. Sensing danger, Batroc is able to dive away moments before Captain America throws his shield through the window, barely missing him. Batroc then quickly storms out of the cabin, followed by Captain America. When Captain America tries to reach Romanoff to tell her that Batroc is on the move, he is ambushed by the very same.

During the fight, Captain America blocks most of Batroc's attacks, causing the terrorist to state that he thought that his opponent was more than a shield. Captain America then decides to fight Batroc in a fair match, and eventually overpowers him by tackling him, thereby smashing him through a door, and then knocking him out.

Captain America then hears Romanoff sarcastically exclaiming the awkwardness of the situation. Looking up, he sees her extracting data from a computer terminal in the room. While Captain America chides her for not sticking to the plan, Batroc regains consciousness and uses the temporarily distraction to flee the scene, leaving a grenade behind. However, Captain America and Romanoff both escape the explosion unharmed.

Although he is able to escape the ship and get to a safe house, Batroc is later discovered and arrested in Algiers by a team of S.H.I.E.L.D. agents and is interrogated about the events on the Lemurian Star. The live footage of Batroc's interrogation is shown to Captain America by Alexander Pierce while they discuss the attack on Nick Fury and Batroc's relationship with the late Director.

Batroc the Leaper begins with fighting Falcon over captain Vassant whom he kidnapped and was about to execute in a military plan he boarded and took complete control over. In an attempt to stop this the US military had sent Falcon to dispatch of Batroc. They fought and at the end Batroc needed to flee the plane and he didn't get the opportunity of murdering Vassant.

This bare survival on his part from being captured and held accountable for his actions lead him to hate the Falcon and get a second chance with him. Later the Power Broker or Sharon Carter contacted him to meet the Flag Smashers as payment for keeping him out of prison in Algeria. With this he provided them weapons and even though Dovich didn't trust him Karli did. During the sabotage of the government meeting on the Patch Act, he had a lengthy fight with the Falcon who know went by Captain America. Sam soon leapt out of the window leaving their fight incomplete. Later he made a diversion with smoke grenades so the Flag Smashers could escape.

He met his end when he confronted Sharon Cater and learned that she was the Power Broker. While he tried to blackmail her by telling her true identity to the public if she doesn't hand over more money, Sharon told him "I don't do Blackmail" and quickly murdered him without second thought. 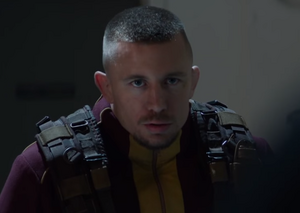