Hegemonic Terrorists
The Battle Kukku Empire, known as the Battle Bird Armada in the Archie Comics, is the main antagonistic organization of the 1995 SEGA Game Gear game Tails Adventure. They are a hegemonic, autocratic empire that seeks world domination. They were the arch-enemies of Miles "Tails" Prower during his adventure on Cocoa Island.

The leader of the empire is the Great Battle Kukku XV, and his son Battle Kukku XVI (also known as Speedy), is also the heir-apparent and next-in-line to lead it.

There have supposedly been fourteen leaders of the empire part of the Battle Kukku lineage with the title of Battle Lord prior to the current one, who is titled as Great Battle Kukku. After his death, Speedy, the sixteenth of the lineage was meant to lead the empire, but both of them eventually met their fate to the hands of the young Miles Prower, who single-handedly defeated the whole organization. 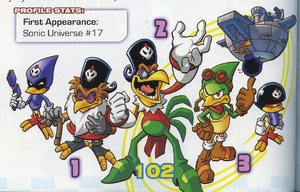 At an unknown point in time, the Battle Kukku Empire discovered the Chaos Emeralds hidden in Cocoa Island, and discovered that they contained ultimate power that could dominate the entire world. Their leader, the fifteenth Great Battle Kukku immediately sent troops to retrieve them, but clashed with one of its inhabitants, none other than Miles "Tails" Prower, who was single-handedly defeating of its troops to stop them from gaining the emeralds. Enraged, the Great Battle Kukku sent various mecha soldiers to confront Miles, but all of them were defeated by the young fox.

Eventually, the second-in-command of the organization and the son of its leader, Battle Kukku XVI, known to his members as Speedy, confronted Miles in a high-speed battle to stop him from getting to the top of Poly Mountain, but ended up retreating, dropping another Chaos Emerald behind. Once Miles got to the Battle Fortress, their headquarters, the main scientist Dr. Fukurokov decided to let Miles deal with his machinery, but was defeated by the fox cub's remote robot. Speedy, now fully armored and ready to fight, challenged Miles to a fair duel, which he accepted. However, the fox came out victorious, and Speedy, the heir to the throne of the empire, was defeated, leaving only one member of the lineage.

In a desperate last resort, the leader of the empire finally decided to confront Miles for himself, but was defeated after a long battle. The last two members of the Battle Kukku lineage were defeated, meaning nobody would be left to lead the empire. The fate of the empire remains unknown, although it is likely it was permanently put to an end.