Battleship Re-Class is the enemy of Abyssal Fleet from the video game Kantai Collection.

Characterized by her cute yet psychotic grin and signature salute, petite appearance, and monster tail that her battleship parts are mounted on, she has short white/silver hair and glowing purple eyes (or red eyes in her Elite form). She wears a black hoodie complete with muffler which is zippered down far enough to reveal her upper body and o-ring top. Also comes equipped with a small white backpack.

Holds a ridiculous amount of aircraft in-game (180) and is one of the very few ships that can participate in every stage of combat.

She is portrayed by fans as very childish, mischievous, energetic, chaotic and creepily gleeful. Due to her being notoriously strong, she is also intimidating as many fan works would paint her as brutal despite her appearance and how she seemingly acted. 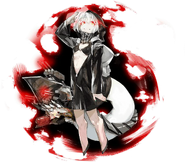 Elite Form
Add a photo to this gallery 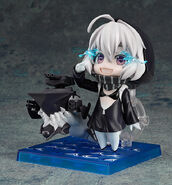 Add a photo to this gallery
Retrieved from "https://villains.fandom.com/wiki/Battleship_Re-Class?oldid=4248485"
Community content is available under CC-BY-SA unless otherwise noted.