Batzarro introduced himself as "Batzarro, the world's worst detective" to Bizarro. He is seen with dual pistols, gunning down couples who walk down Crime Alley, the opposite of Batman's origin. Bizarro felt sorry for Batzarro since he doesn't get out much on account of his lack of friends. Batzarro claimed that he came from the same place that Bizarro does and wanted to be a hero like his idol Batman. Bizarro offered to team-up and Batzarro agreed. The two shook hands and suddenly Bizarro started to feel strange. Batzarro is amused by this and revealed the Blue Kryptonite shard he found after the meteor shower. Bizarro flew away and returns to normal (so to speak) and tells Batzarro that he will be back to help him solve the murders Batzarro has just committed. Batzarro thanked him and adds that he hasn't touched anything so the crime scene is not contaminated. (It should be noted that this entire exchange is done in the usual Bizarro negative speak).

At times it seems as though Batzarro is trying to aid Batman, but his mangled dialogue and inexplicable actions make it difficult to be sure. According to Bizarro "Him no come from same place as Bizarro #1. That am why we am so different." He may be a failed clone like Bizarro or a Batman from another planet or alternate reality. Some believe that this statement was actually reversed due to Bizarro-speak. Therefore, it could also be read as Batzarro saying that he came from the same place as Bizarro, and that is why they're so similar. It was revealed that the Joker created Batzarro, therefore he comes from the same place as Bizarro. They were both created by the Joker.

Batzarro apparently met his end when he jumped in the path of a bullet shot by the Joker to save his idol's life. Before then, Batman never even knew that Batzarro existed as the Joker reveals that he created Batzarro so he would have the pleasure of killing 'a Batman'. He was last seen been being put into the Phantom Zone by Bizarro in an effort to heal him.

However, he later appeared with Bizarro, who apparently succeeded in healing him, stopping The Riddler and his gang. He appears to be more intelligent and a more competent Crime Fighter. Bizarro seems to disapprove his methods and calls him "Not-Bruce". 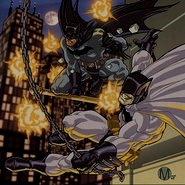 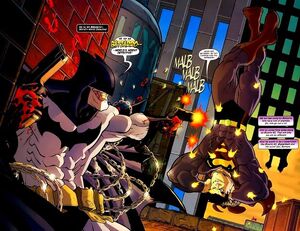 Add a photo to this gallery
Retrieved from "https://villains.fandom.com/wiki/Batzarro?oldid=2246200"
Community content is available under CC-BY-SA unless otherwise noted.