Carrying out missions for Zone.

Defeat the Fiveman and conquer Earth for Zone.

The Batzler Soldiers are a race of crustaceanoid aliens who act as the soldiers of the Silver Imperial Zone Empire and antagonists in Chikyuu Sentai Fiveman.

The dress in black jumpsuits with the Zone logo emblazoned on their chests and wield crab claws as their primary weapons.

A Batzler with skills as a ninja and the leader of the Batzler Corps, he is brought in by Zone in episode 24 to train their Batzlers and make them more adept at fighting the Fiveman. To improve upon the Batzlers, Batzlergin made them use a magical stone he had that would allow them to turn into any animal using it.

One of the Batzlers trained by Batzlergin, he proved difficult to train and gained a turtle shell on his back after misuse of Batzlergin's stone. He later defects and allies with the Fiveman and assists them in defeating Batzlergin.

The Batzler Soldiers were one of the five groups of revived enemy grunts summoned by Zaigan to participate in Emperor Daidas' invasion of Earth. They were defeated by a team up between the Fiveman, Jetman, Zyuranger, Dairanger and Kakuranger.

The Batzler Soldiers were among the army of enemy grunts that existed within the dimension of Los Dark. They later merged with the other grunts to form the Combined Combatant to take on the Gokaigers, though the resulting fusion proved unstable due to the number of minds within it fighting with each other over getting to finish the Gokaigers off. 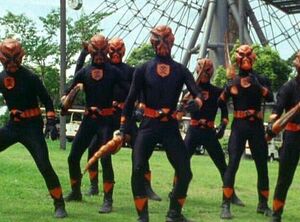