Villains Wiki
Register
Don't have an account?
Sign In
Advertisement
in: Articles under construction, Categories Needed, Infobox Update,
and 7 more

Executive of The Syndicate

Manipulative Leader
Bauer is an antagonist from Dragalia Lost and the main antagonist of Bellina's adventurer story. He is a member of The Syndicate.

Bauer resembles a typical butler. He is a grey haired man with a mustache who wears glasses, a brown coat, light brown pants and white gloves.

After Bellina's failed attempt on the lives of Andromeda and Aldred, she reports to Bauer. He trusts that she had a fruitful encounter with Aldred. When he hears she let Aldred go, he is quite miffed by her "bad habits". He acknowledges her thirst for challenge, but he will not tolerate any opposition to the Syndicate. She reassures him that she will finish Aldred off later. He also reveals the creation of a modified fiend in their experiments, Ij-485, and have it attack Aldred, which she feels to be an insult to see the creature cut in on her turf. Bellina also believes it will be tipped to crush her as well. He also reveals he knew she would let Aldred go as well. When Bauer asks if she would come see Aldred's final moments, she states it’s none of his business and she misjudged Aldred. When Bauer meets Aldred, he expresses delight for their seemingly short meeting and sets several goons on him.

After Aldred dispatches them, Bauer has him and Andromeda surrounded by more of them in order to pit them against Ij-485 and says that Aldred should be honored to die for the Syndicate's cause. When the fiend gets dispatched by Bellina, he asks her what made her kill it. Furious at her obstruction, he sends out his goons to dispatch her. However, Bellina triggers a smokescreen so that she, Aldred, and Andromeda can escape. Bauer then tells her that he holds her freedom in the palm of his hand. Bellina later confronts Bauer in his quarters. She tells him about how he's been planning to get rid of her. He responds by telling her what it means to be in groups and why she, with a mistaken idea of freedom, will likely never understand. When he orders Ij-459, another modified fiend, to be brought out, one of his men opposes that idea as it cannot be controlled, but Bauer rebuffs his concerns and asks if he is a traitor, the crony denies this and follows the command. The fiend then begins to kill the cronies indiscriminately. Upon seeing this, Bellina realizes that what is happening cannot be considered freedom. Bauer then tells her that her opinion is of no consequence and he needed to placate the Syndicate's demands for progress. She also realizes that he intends to shut the hideout down and Bellina is just another cog. He also plans to sacrifice his subordinates to destroy the base in order to kill her. The fiend is also revealed to be capable of regeneration. When Aldred arrives and helps her dispatch the creature, more of the modified fiends attack them. Following the fiends getting killed off, Andromeda informs Aldred about Bauer heading north with a squad of Syndicate soldiers, Aldred tells Bellina to head to the Halidom while he pursues the group. 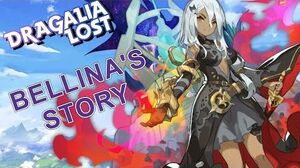