Villains Wiki
Register
Don't have an account?
Sign In
Advertisement
in: TMNT Villains, Evil from the Past, Doctors and Scientists,
and 17 more

Dr. Baxter Stockman is a major antagonist in the 2016 live-action sci-fi action comedy superhero film TMNT: Out of the Shadows. He is a former TCRI employee, a genius but mad scientist, criminal and a terrorist who aids the Shredder and the Foot Clan in the processing of their plans. He first appeared in a quick cameo appearance in the 2014 first film Teenage Mutant Ninja Turtles.

He is played by K. Todd Freeman as a silent cameo in the first film and by Tyler Perry as a secondary character in Out of the Shadows.

He only makes a quick cameo when April O'Neil asks the film's primary villain, Eric Sacks what his experiments are for. In the scene, we see Sacks, April's dad, and Baxter Stockman standing in the background. In a later scene, Stockman's name was written on a whiteboard by April when she is trying to put together her knowledge of Project Renaissance.

Although a prominent industrialist and a genius who graduated MIT at 15, he is soon revealed to be working with the Foot Clan, using salvaged alien technology to rescue Shredder from jail by teleporting him away during a prison transport. When Shredder learns that the component Stockman has is one of three parts to a teleporter that would allow the alien warlord Krang to dispatch his ultimate war machine to Earth, he arranges for Stockman to assemble the other pieces. Once the portal device is complete, however, Shredder dismisses Stockman's efforts and has him taken away to their headquarters in Tokyo. Realizing that Shredder has betrayed him, Stockman unsuccessfully tried to break free of the Clan men taking him away as he screamed for mercy. At the end of the film, April O'Neil states that Stockman remains at large. 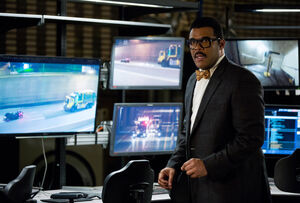 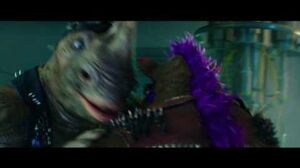