Villains Wiki
Register
Don't have an account?
Sign In
Advertisement
in: TMNT Villains, Doctors and Scientists, Traitor,
and 34 more

Plotting to defeat the Turtles.

Doctor Baxter Stockman is a major antagonist in the 2003 Teenage Mutant Ninja Turtles franchise. He is originally the scientist of the Foot Clan, who is repeatedly tortured by the Utrom Shredder for his failures, to the point that he is reduced into nothing more than a brain with an eye and a spine. Afterwards, he defects from the Foot and works with Agent Bishop ever since.

He was voiced by Scott Williams.

In the 2003 Series, Stockman is similar to the Mirage comics except that he works for the Foot. He is responsible for creating the mousers that destroyed the turtles' home in the previous episode. However, He used his mousers to rob banks instead of getting rid of the rat problem in the city under the employ of a mysterious benefactor. When his assistant April O'Neil found out his true purposes, Stockman sent mousers to exterminate her, but she was saved by the Turtles. April returns to Stocktronics with the TMNT in to defeat Stockman. Stockman escapes the turtles but Hun catches him and brings him to his benefactor, Oroku Saki before Stocktronics is destroyed by the Turtles and April. Stockman tells Saki that this is a small setback but for the price of his failure, Stockman's left eye is clawed out by Hun with a drill.

He volunteers to find evidence of the Turtle's demise in exchange for full access to the Utrom exosuit that he studied to create the Foot Tech Ninjas. The Shredder lets Stockman find evidence of his enemies' end, but threatens the scientist that his next punishment will be his final if he comes back with no evidence.

Stockman goes to April's shop which was destroyed by the Shredder in the previous episode and finds no evidence. Stockman then decides to make his fake evidence to present to the Shredder. He fooled the Shredder to think the Turtles are dead and he gets full access to the exosuit.

However, the Shredder learns that the Turtles are alive and contacts Stockman, who is busy working on his project. Stockman discovers that someone hacks into the system but decides that it would be a good distraction while he make preparations. With his new exosuit Stockman bursts in to the Shredder's throne room and fights both the Turtles and the Foot. The TMNT and the Shredder briefly team up to defeat Stockman. Don fires a rocket at the deranged scientist using the robotic arm that Leonardo severed earlier, sending Stockman into the sky and apparently explodes.

It is revealed that Stockman survived only to be reduced to a head in a robotic spider body that can be voice-activated by the Shredder. Saki can control Stockman remotely with a robotic eye implant that covers his former wound which shocks Stockman if he disobeys or becomes arrogant. He infiltrated TCRI, the Utroms' hideout under the Shredder's command.

Stockman also destroyed the oracle pods, shut down the security system, and guided Saki and the Foot to the building through an underground path. Stockman regains control and attacks the Shredder when Professor Honeycutt a.k.a the Fugitoid mimics the Shredder's voice to overrides the voice protocol. He escaped thereafter.

Sometime later, he planted his head in an Utrom exosuit and tricked Leatherhead into being a part of his evil schemes. Stockman also befriended Leatherhead and helped him build a transmat in exchange for assistance for his robotic body and the Turtlebot. 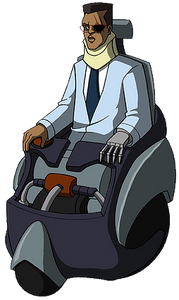 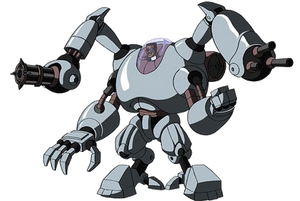 Stockman in his robotic suit 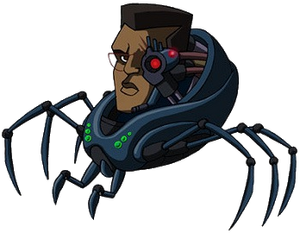 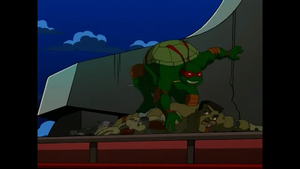 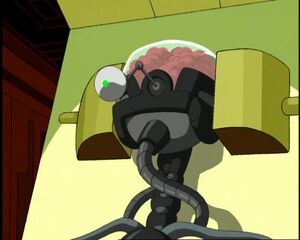