Villains Wiki
Register
Don't have an account?
Sign In
Advertisement
in: Articles under construction, Thief, Cartoon Villains,
and 11 more

Steal the plans to Ruth's Hover-Car to make lots of money (failed).

Baz and Bernie are the main antagonists of Thomas & Friends episodes, A New Arrival and World of Tomorrow, which together compose the 45-minute special Marvelous Machinery. They are a pair of thieves who planned to steal inventions to make lots of money and were the former owners of Sonny.

Both Baz and Bernie are mischevious crooks. Out of the two, Baz is the more intelligent, often having to stop the rather simple-minded Bernie from spilling their secret plans. Baz is noticeably more villainous compared to Bernie, willing to force Sonny to help them by threatening to scrap him and willingly abandoning Bernie to get a bigger share of profits. Baz was also willing to blame Bernie for everything to avoid getting arrested. Bernie is also the more naive of the two, as he tends to miss a few key details or state the obvious.

Baz and Bernie first arrived on Island of Sodor onboard Sonny, looking to steal an invention from The Technology Fair. By disguising themselves as cooks, they managed to infiltrate Ulfstead Castle.

Following a few mishaps with the other inventions, Baz and Bernie decided to steal the plans to Ruth's Hover-Car. Due to Sonny's disobedience, the pair chose to use Kenji as their getaway vehicle. During the escape, the pair were separated when Bernie removed Kenji's coupling and was left stranded on the Lightweight Coaches.

Baz was eventually caught by Thomas, Rebecca, Sir Robert Norramby, Ruth and the police and - after Bernie caught up and accidentally revealed their plans, the pair were arrested and taken away by the police. It can be presumed that they were given life sentences. 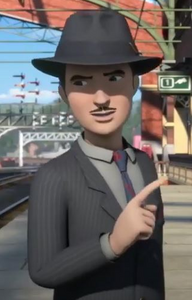 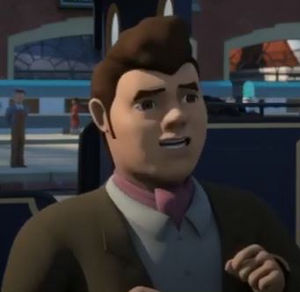 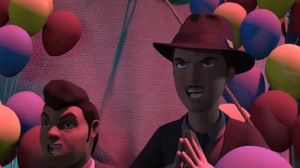 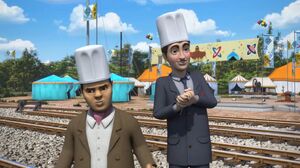 Baz and Bernie masquerading as cooks. 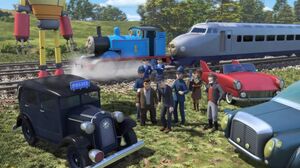 Baz and Bernie's arrest and defeat. 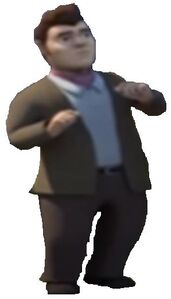