Spy for the Jaicro Empire

Going on the internet.

Become a god and get revenge of everyone that made fun of him.

Bea (in Japanese: ビー Bī) is Dr. Gel's right handed assistant. He is very diminutive compared to Dr. Gel. However, "Never Ending Dandy Baby" revealed that we was a spy for the Jaicro Empire and the main antagonist of Space Dandy.

Bea has a large, cucumber shaped head and light green skin. He also has medium black hair, parted at his forehead. Bea wears a large white lab coat and blue pants. Under his coat he wears a purple shirt.

Bea is typically laid back, using any means possible to try and follow Dr. Gel's order. Unfortunately for Dr. Gel, this is not a good thing as Bea will try to take the easy way out in situations.

He is not as passionate about hunting Dandy as Dr. Gel, but has a knack for finding him anyway, typically by pure luck such as seeing him on television or on Meow's status updates.

After he shot Dr. Gel, soon after, he attempted to take the Pyonium energy inside Dandy for himself. However, unfortunately for Bea, Gel survived the gun, and before Gel could die, out of anger, Dr. Gel crushed him in his hand, killing him as Bea pathetically screams in terror for his life. 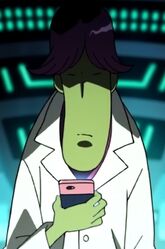 Bea on twitter
Add a photo to this gallery

Retrieved from "https://villains.fandom.com/wiki/Bea?oldid=3633802"
Community content is available under CC-BY-SA unless otherwise noted.