Evil Scientists
Terrorists
The Beaker Boys are a one-time evil team from the 2016 reboot of the Cartoon Network original series, The Powerpuff Girls, only appearing in the episode "Rebel Rebel". They are a famous team of mad scientists from an eponymous TV show, who steal people's laboratories and blow them up.

Professor Utonium came back to the house with The Beaker Boys and introduced them to the girls. Blossom recognized them as the scientists who blow stuff up on TV and Elbow proved those claims by dumping acid on the couch, which blew it up. Blossom did not see the appeal in what they did, nor did she understand the scientific purpose of blowing up their couch and Heironymous Bass just said that now they knew that the couch blows up when acid is dumped on it. Unsure about The Beaker Boys, The Powerpuff Girls took Professor Utonium into the kitchen and complained about them, saying they were unsafe people to have around. Professor Utonium assured them that The Beaker Boys were perfectly stable people.

After a day of blowing things up with Professor Utonium, Heironymous Bass told him that they were planning on making him a fifth member of the team, under one condition: They made them a monster. Professor Utonium was afraid of this at first but when Moe showed him a fancy lab coat, he changed his mind and created Mr. Big Eye, a giant eyeball monster who wreaked havoc on Townsville. The Powerpuff Girls went to stop this monster, while Professor Utonium stood there, dumbfounded, and stupidly realizing his mistake.

Professor Utonium found out that The Beaker Boys were up to no good and Heironymous admitted that he didn't actually want to be his friend at all. Moe expounded on this, saying that scientific laboratories aren't cheap. Elbow added that their job required them to buy a lot of labs since they're always blowing them up but it was less expensive to steal them. Joe stated that they liked his lab and decided to steal it. Professor Utonium was heartbroken to hear that they didn't actually like him, but at this point, it was too late. The Beaker Boys hooked up his laboratory to their flying machine and they took off with it.

While The Powerpuff Girls fought Mr. Big Eye, Professor Utonium used his chemistry set as a substitute for his stolen lab as a way of inventing a good monster called Spongey, who fought with Mr. Big Eye and morphed with him, turning them into a good monster called Mr. Sponge Eye. Mr. Sponge Eye went to The Beaker Boy in their new location, picked up Professor's lab, shook them out of it, and went back home with it.

The leader of the team and the shortest member. As the leader of the team, Heironymous Bass is the one in charge of everything, is usually the first person of the group to talk, and is always the instigator of all of their evil plans. Heironymous Bass is also a master of manipulation, who is good at peer pressuring people into joining their team, just so that they can eventually betray them and steal their labs.

The sole Filipino. Joe is a polymath who seems to like everything that happens, no matter what it is. He and Moe are best friends and most of their destructive acts are done hand-in-hand. His catchphrase is "I like that" or any variant of that phrase.

He and Joe are best friends and most of their destructive acts are done hand-in-hand. Moe persuaded Professor Utonium into creating a monster for them, by presenting him with a very shiny and temping lab coat. His signature weapon is stereotypical cartoon mortar bombs.

The strongest and largest-framed man on board. Elbow's signature weapon is test tubes full of explosive liquid, which only explodes when it's dumped on a victimized object. Despite not being the leader, he usually opens episodes of The Beaker Boys. 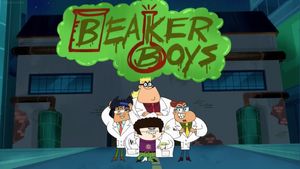 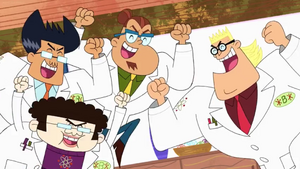