Beaky Buzzard is a major antagonist in the Warner Bros. Looney Tunes and Merrie Melodies animated series. Beaky is a lanky buzzard (although he more closely resembles a vulture or condor). He has appeared in many of Looney Tunes' short films and comic books.

He was voiced by the late Kent Rogers and the late Mel Blanc (who took over the role after the former's death).

It is revealed in the short "Strife with Father" that Beaky was dropped off on a the doorstep of a small house in a tree belonging to a sparrow couple (Gwendolyn and Monte) when he was just an egg. After he hatched, Monte showed disgust at his appearance but Gwendolyn tells him that just as told in the story of The Ugly Duckling, and he will grow bigger into something beautiful. However once he gets older, no such thing happens and he is quite dim witted and stubborn. Under Gwendolyn's request, Monte decides to take Beaky to go hunting for chickens. Beaky refuses to fly down from the tree and remains in his nest, so Monte saws off the tree branch to get him off. They arrive at the farm, and Monte decides he'll catch the chickens while Beaky counts them. When the chickens fight him off, Monte decides to have Beacky knock them out with a hammer while he gets them to chase him out of the hen house. However both attempts result in Monte getting hit with the hammer himself due to Beaky's own stupidity. Monte decides he'll throw a grenade into the hen house. However a chicken simply throws it out and Beacky mistakes it for an egg. He decides to give it to Monty, who continues to run away in fear as a response. When he realizes Monty doesn't want it, he gives it to Gwendolyn, who throws it out of the tree before it explodes. However it lands on Monty and severely injures him.

At some point Beaky was recovered by his biological Irish mother and his three brothers in which he is referred to as "killer" by her. When she has them fly off to bring home some prey for dinner in the short "Bugs Bunny Gets the Boid", Beaky refuses, so she kicks him off the mountain and he goes flying off for a rabbit on her request. He finds Bugs Bunny on the ground, and tries on several attempts to kidnap him for dinner, though he is continuously outsmarted by the rabbit. Whne Beaky nearly succeeds, Bugs manages to outsmart him again by dancing with the young buzzard, and twirls him into the ground in front of an animal skeleton. Beaky panics and calls for his mom, who arrives and berates Bugs. However Bugs reveals that Beaky is just fine, and she kisses the rabbit, declaring him her hero and causing him to blush.

Beaky's mother once again requests once more that Beaky and his brothers get some prey for dinner in "The Bashful Buzzard". When they all fly over a farmyard, Beaky's brothers manage to capture several livestock, Beaky as usual goes after a metal rooster thinking it's real, only to injure himself. His mother arrives and berates him for not being as smart as his brothers, so Beaky goes after a sheep, but only angers to strip her of her wool, embarrassing her. Beaky apologizes and gives her back her wool, however she beats on him. Beaky eventually kidnaps a baby bumble bee for dinner, however it's mother arrives and stings Beaky in the butt, causing him to let it go. When Beaky soaks in butt in a puddle of water, he sees what he thinks is a short little snake laughing at him-so he challenges him to a fight. However it's later revealed to be a dragon and he starts attacking Beaky. Beaky comes home to his worried mother, and it's revealed he did in fact overpower and kidnap the dragon. It can be assumed his family had him for dinner.

Beaky returns in the 1950 short "The Lion's Busy", exhibiting much craftier and more intelligent behavior than usual. He shows up at the tenth birthday party for Leo the Lion and drops a book in his head from a tree as a gift. Leo reads it and it says that lions rarely live up to over ten years. He panics and it's revealed Beaky is waiting on the tree top for Leo to die so he can eat him-telling him that he isn't getting any younger. Leo admits this but also says he isn't getting any older and starts dancing. Beaky throws a banana peal on the ground and Leo slips off a cliff. However he survives and Beaky tries to eat his tail. Leo tries to beat Beaky with a club, but Beaky flies up to the top of a tree. Leo climbs it to get the Beaky, but Beaky pokes at his hands causing him to fall. Leo tries again, but Beaky has flown down to the ground once Leo gets to the top, and cuts down the tree with an axe. Leo survives the fall and Beaky once again tries to eat his tail. Leo escapes on a space ship going to the moon, but once he lands on the moon it's revealed Beaky flew up there in time. Leo goes to hide in a cave and Beaky waits outside for him. Several years pass and an elderly Leo tells Beaky to just eat him already, However, an elderly Beaky tells him he can only eat marshmallows and offers the lion one.

Most recently, Beaky Buzzard has had minor roles in various Warner Bros. projects, such as Tiny Toon Adventures, where he plays the mentor of the minor character; Concord Condor and the movies Space Jam and Looney Tunes: Back in Action, where he has a short cameo and was voiced by the late Joe Alaskey. He also appeared in the Sylvester and Tweety Mysteries. In the episode "3 Days & 2 Nights of the Condor", where he was again voiced by the late Alaskey. Beaky was put in one episode of Duck Dodgers, and he appears in The Looney Tunes Show in the episode "Ridiculous Journey". 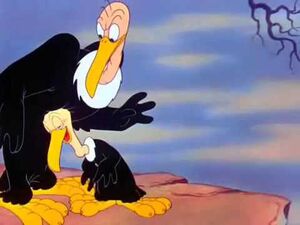 Beaky with his mom. 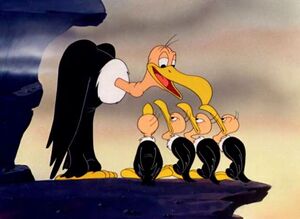 Beaky with his brothers and his mom. 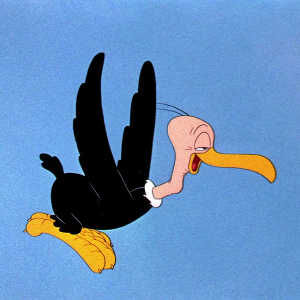 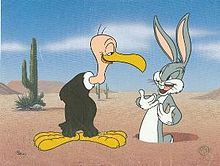 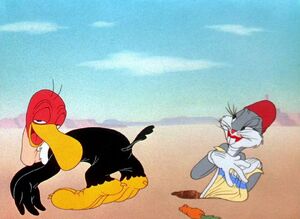 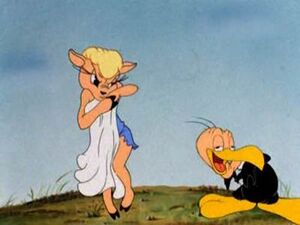 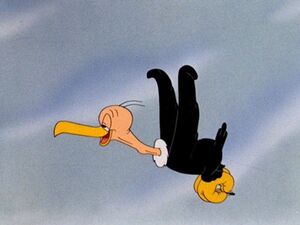 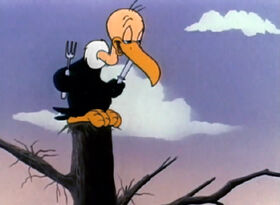 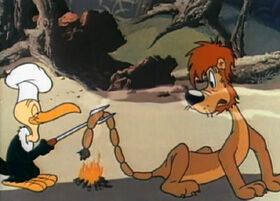 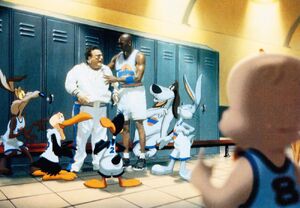 Beaky on the roster of Space Jam as part of the Tune Squad lead by Michael Jordan.

Beaky in Looney Tunes: Back in Action. 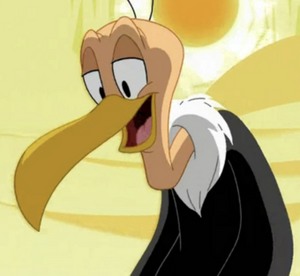 Beaky in The Looney Tunes Show. 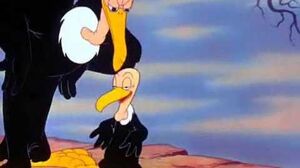