Villains Wiki
Register
Don't have an account?
Sign In
Advertisement
in: Villains of Folklore, Mythology Villains, Harbingers,
and 4 more

A Bean Nighe is a Scottish fairy or death-spirit that is similar to the Irish Banshee - said to haunt rivers and streams a Bean Nighe is an omen of death and is said to either be the spirit of the dead, a fairy or a form of an ancient Celtic war-goddess known as Morrigan.

According to legend a Bean Nighe takes the form of an old hag dressed in green who sits by rivers and streams washing bloodstained clothing, any mortal who passes this spectre will be doomed to die or have disaster befall them in a short while (such as the death of a loved one).

Although often hideous a Bean Nighe may on rare occasions take the form of an attractive maiden but doesn't actively seduce mortals, though they can be conversed with and may even grant wishes if approached correctly - however the presence of a Bean Nighe signals death and misfortune to those who see them, thus they are rightfully kept at a distance and rarely approached.

Bean Nighe in many legends are famous for manifesting before wars, massacres or conflicts - washing the bloody clothes of those destined to die in said violence, often the Bean Nighe would perform a special kind of mournful wail when doing so known as a keening and many mothers and wives would grow fearful when hearing these sounds, knowing it signalled the imminent death of sons and husbands off fighting.

Often seen as a type of fairy of spirit there are also some legends that state a Bean Nighe is created when a woman dies in childbirth, her spirit is doomed to haunt the world until her life would of normally ended (in the medieval world, where folklore was common, childbirth was a dangerous and often fatal experience thus it was only natural such tales would be woven).

In the modern world a Bean Nighe is normally regarded as little more than an alter-ego of the Irish Banshee but this is technically false as they are two different creatures despite their similarities. 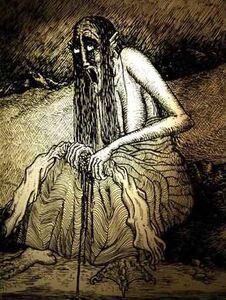 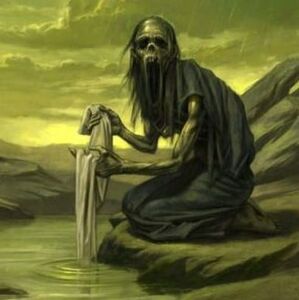 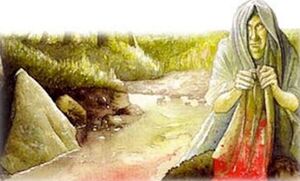