Fighting against Sonic and the Freedom Fighters.

Defeat Sonic the Hedgehog and the freedom fighters.

Earn money for defeating Sonic the Hedgehog.
Collect shiny objects.
Try to clear his name after being framed by Heavy Magician

Bean also appears in the Archie Comics' Sonic the Hedgehog and its spin-off comic series. He first appeared in Sonic the Hedgehog #160 where he attacked Sonic on his birthday. During the fight, Bean jumps out of a window after Fiona Fox's keys and is later knocked out by Shadow the Hedgehog. Like Bark, he used to be part of a mercenary band led by Nack the Weasel.

When a Sol Emerald appeared on Mobius, Bean, Bark, and Nack went after the emerald as Team Hooligan, stealing the Emerald and briefly kidnapping Cream during a battle between Team Rose and Team Dark. However, the Team was intercepted by the Babylon Rogues and it's revealed that Bean knows Jet the Hawk, Wave the Swallow and Storm the Albatross. When the team tries to drop missiles onto the Team in order to kill them, Bean saves his friends by making the missiles explode prematurely. During the ensuing battle with the Rogues and Teams Rose and Dark, Blaze the Cat tricks Bean into defeating himself and Team Hooligan by making him bring out his biggest bomb and igniting it. 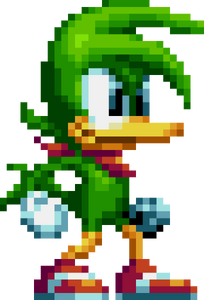 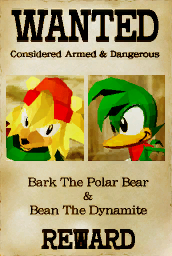