One of Slappy Squirrel's enemies

He occasionally teams up with Walter Wolf and Sid the Squid to defeat Slappy Squirrel.

He is voiced by the late comedian Avery Schreiber.

He was mentioned in Slappy Goes Walnuts as he was imitated by Slappy Squirrel.

He, along with Walter and Sid, had a non-speaking appearance in the last episode of Animaniacs. This was the only time that Beanie did not speak. This was also the last time that Walter, Sid and Beanie appeared in Animaniacs, making them one of the few Animaniacs characters to not appear in the Animaniacs movie, Wakko's Wish.

Just like Walter and Sid, Beanie gets blown up, but all three of them survive from the explosions that happened.

Beanie is somewhat dimwitted as he didn't listen to what Walter Wolf said when he was planning to defeat Slappy Squirrel causing Walter and Sid to get annoyed with him.

Beanie is a brown bison with black horns, a black nose, black eyes, blue and white shoes and a small blue hat.

Unlike Walter and Sid, Beanie does not wear a pair of glasses.

He occasionally wears clothes, but sometimes he doesn't wear clothes. 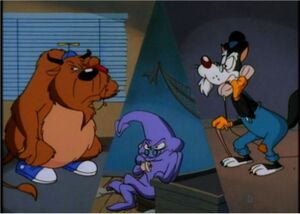 Walter, Sid and Beanie talking on their phones
Add a photo to this gallery
Retrieved from "https://villains.fandom.com/wiki/Beanie_the_Bison?oldid=3666511"
Community content is available under CC-BY-SA unless otherwise noted.