Make Reagan happy at all costs.

Bear-O is the final antagonist of the first season of the Netflix animated show Inside Job. He is a robotic teddy bear that was made by Rand Ridley for his daughter Reagan to make her happy and to hug her because he never wanted to. However, when Reagan grew up and Bear-O saw how unhappy she was while working at Cognito, Inc., he planned to take down the entire company and kill everyone that ever made Reagan unhappy.

He was voiced by Alex Hirsch, who voices Grassy Noel Atkinson in the same series and has also voiced Stanley Pines, Old Man McGucket, Jeff, and Bill Cipher in Gravity Falls.

Bear-O was created to make Reagan happy, but due his inventor's poor understanding of people skills his efforts would only traumatize her instead. Bear-O seems incapable of distinguishing between the needs and desires a child and an adult. A major flaw in his programming make Bear-O take unnecessary and extreme measures which would lead him to nearly destroying Cognito Inc. and killing anyone who upsetted Reagan.

Bear-O is a large robot with a the head of a teddy bear. He eggshell white paint job has a blue trim, grey circle on his stomach and dark grey waste. He has a bulky build and tank treads in place of legs. Decades later after being rebuilt Bear-O is now covered in dents, some of his body parts are rusted, has light grey metal plate patching up the upper right side of his torso and the blue part of his left shoulder joint is missing

Bear-O has tremendous strength capable of breaking down giant metal doors and tossing multiple people around like it was nothing. Bear-O's Armor is virtually indestructible able to survive a bazooka attack without a scratch and take the blows from another killer robot head on. Bear-O has incredible firepower that could put almost any adversary into a corner and either melt down metal or reduce anything in his attack range into a pile of rubble.

Bear-O doesn't have a neck, meaning that he has a limited field of vision and has to rotate his entire body to see around itself and ennimeies cound get close is they stayed low enough. Bear-O is programmed with a single purpose, unable to dedicate his processing power to any other purpose. Bear-O has an override password ("ORRIN") to deactivate him.

Bear-O was made by Rand to make his daughter Reagan happy and to hug her because he never wanted to. Despite working as intended, the fact that Bear-O wasn't gentle, and because of his imposing figure, Bear-O's hugs only traumatized Reagan and made her unable to receive hugs without panicking and lasing out. Bear-O would pop up randomly, scaring Reagan with its surprise hugs and destroying everything standing in its way to her.

Eventually, Bear-O was dissembled put in boxes and kept inside Reagan's parents house until Reagan helped her parents with moving her father's stuff out of her mother's house because of their divorce. To prove he was a good father, Rand reassembled Bear-O, much to Reagan's dismay.

Rand took Bear-O to Reagan, who was being convicted for attacking a reptoid, and the robot was used as evidence that Rand's bad parenting was the cause of the incident. After this, Bear-O was taken back to Cognito, Inc. where he stayed peacefully until he came to the conclusion that Reagan's workplace was making her unhappy.

Because of this, Bear-O stole the unspoken file in an attempt to destroy the deep state, but when it was revealed what Bear-O had done and what he was about to do, the file was destroyed in an attempt to destroy the robot with a rocked launcher. Bear-O, however was unharmed because Rand had made him nearly indestructible as he didn't want Reagan to accidentally destroy him.

Bear-O then attempted to kill Reagan's friends and father in order to get rid of the people who made Reagan unhappy. Bear-O needed an access code do be deactivated that Reagan forgot, allowing the robot to go on a rampage. Bear-O never succeeded in his goal and was deactivated when Reagan remembered that the password was Orrin, the name of her childhood friend. 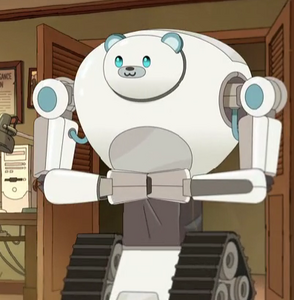 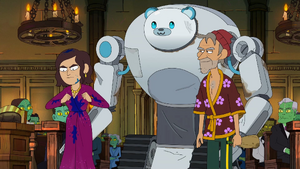 Bear-O years later after being rebuilt.

Bear-O explaining his reason for treason 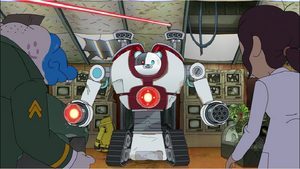 Bear-O on the Inside Job Wiki