Gambling at the nightclub.

Kill Mike to get revenge on him for cheating (possibly failed).

The Bears are the main antagonists in Illumination's seventh animated feature film Sing. They are a trio of Russian-accented brown bears who become enemies of Mike.

They were all voiced by Jim Cummings, who also voiced Steele in Balto, Fuzzy Lumpkins in The Powerpuff Girls, Razoul in Aladdin, Ed in The Lion King and Nessus in Hercules.

The leader wears a black leather jacket over a white shirt, a black hat, and black pants with a large belt buckle. The second bear wears a brown and white jacket and a black flat cap. The third bear has squinted eyes and wears a light blue jacket covering a dark blue shirt.

All three bears are greedy, cunning, deceitful, manipulative, and treacherous thugs who enjoy playing cards and gambling at a nightclub. They are very serious about their games and hate being cheated. After Mike swindled them during poker, they relentlessly chased him, the leader almost eating him on multiple occasions.

During a poker game with Mike, the bears' leader discovers a card peaking out of Mike's suit. Furious that the mouse cheated them, they chase him through the nightclub, but he ultimately escapes. Later, the trio notice Mike's car parked in front of the Moon Theater, and grab them during a phone call with his girlfriend Nancy. After learning that Mike spent all of their money, the leader almost eats Mike, but he cowardly tells them he can get them $100,000 from Buster Moon.

The bears trespass in the theater, demanding Buster's prize money in exchange for Mike's life. When Buster stalls, the leader smashes the chest containing the money, only to find cash and objects with a total monetary value of $1,000. Everyone's combined weight, along with the force of the baseball bat hitting the chest, causes Buster's makeshift glass stage full of water and singing squids to crack. This starts a chain reaction that ultimately leads to the Moon Theater's collapse. Assuming that Mike died in the aftermath, the bears quickly run before they can be connected with the theater's destruction.

When Buster's singers stage a concert in the theater ruins, the bears see Mike performing on "My Way" TV and quickly head over to get their revenge. They manage to kidnap Mike without being seen and the leader tries to eats Mike again, only for his girlfriend Nancy to come to his rescue in Mike's car. As the two mice drive off, they don't notice that the bear leader is sneering them while hanging onto the back. Mike later drifts the car in leaves the leader and other bears alone in the street. 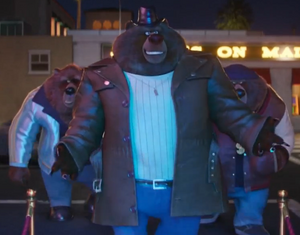 The bears enter the city nightclub. 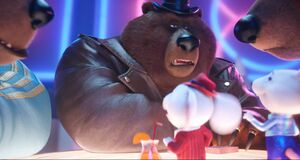 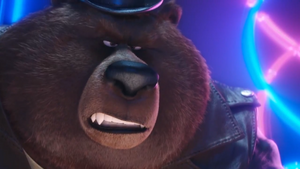 "...Except I still can't tell how you cheated." 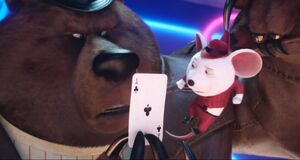 The bear leader finds a card in Mike's suit. 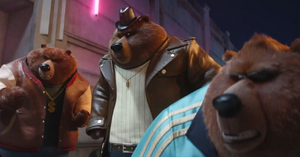 The bears glare at Mike as he escapes the nightclub. 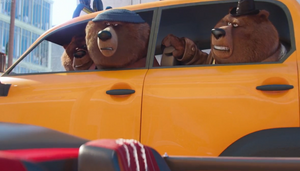 The bears discover Mike's car in front of the Moon Theater. 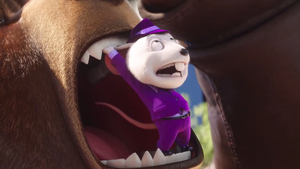 The bear leader about to eat Mike. 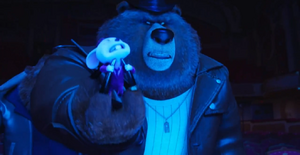 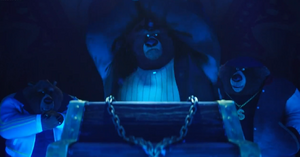 The bear leader prepared to break the chest containing the prize money. 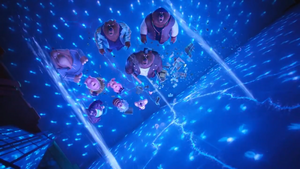 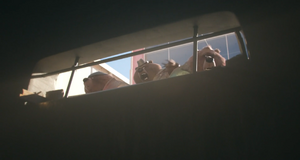 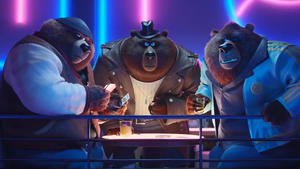 The bears watch Mike performing "My Way" on TV. 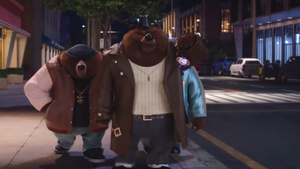 The bears snatch Mike after his performance. 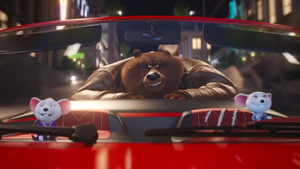 The bear leader clinging to the back of Mike's car as he drives away. 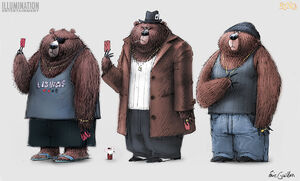 An early size comparison between the bear trio and Mike. 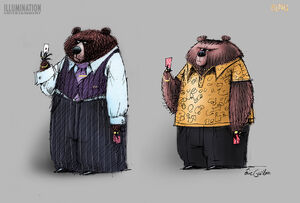 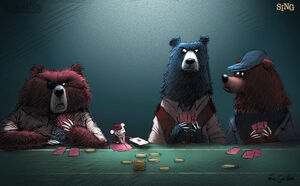 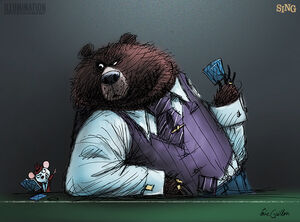