Punish the old woman for breaking in (succeeded).

Vengeful Animals
The Bears are the titular main antagonists of the story Three Bears, it is considered a prototype of the more famous Goldilocks fairytale but is far less of a children's story and follows darker, more violent themes - which were common in older tales but even by the more gruesome standards of the "prototype" fairytales this story stands out for extreme levels of disportionate retribution.

It was most famously written by the late Eleanor Mure in 1813, but is based on older tellings of the story (as is often the case with fairytales and folk stories in general).

The Bears are not a family in this story but rather simply three bears of varying size who live together in the forest, one day they leave their home and an old woman arrives and begins to cause trouble via stealing their food, breaking their chairs and sleeping in their beds - she was also said to curse and generally act in a very disagreeable manner.

When the bears returned they found the old woman asleep and when she woke up she was too late to avoid the bears' extreme wrath as they attempted to burn her alive in the fireplace - yet she would not die, thus they dragged the scorched old woman outside and tried to drown her in the river, yet she still refused to die.

This prompted the bears to take the scorched, half-drowned woman to a church where they finally killed her by impaling her body atop the spire, the bears then proceeded to dance merrily at the old woman's demise.

The Bears are extremely violent and zealous punishers of wrongs, to the point even minor misdeeds warrant extreme torture and death - they are thus also extremely vindictive and inventive in their methods and have no qualms about brutally killing an elderly woman for her trespass, indeed they rejoice at her death and take pride in their work.

Other than these negative traits the Bears are largely neutral beings if undisturbed who simply live in their house in the woods and likely keep to themselves, save to punish those who displeased them.

The Bears would all possess great strength, durability, claws and fangs but are most known for their inventive use of torture and murder - devising many different ways by which to dispose of a victim. 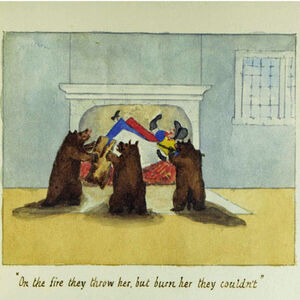 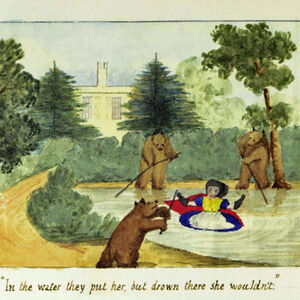 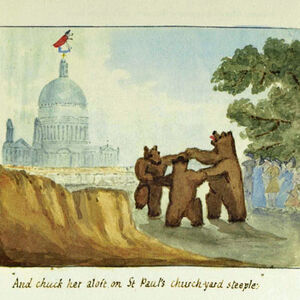 Retrieved from "https://villains.fandom.com/wiki/Bears_(Three_Bears)?oldid=3899431"
Community content is available under CC-BY-SA unless otherwise noted.