Beast Man is a character in the popular toy line and cartoon series Masters of the Universe, the savage right-hand man of Skeletor, he has control over many wild creatures and has brute strength.

Beast Man was one of the first seven characters to be created for the Masters of the Universe toy line by Mattel in the early 1980s, and one of the first four to be completed and released (the other three being He-Man, Man-At-Arms and Skeletor). When the character was developed by Mattel, the name of Beast Man was reused from a figure in Mattel's earlier Flash Gordon toy line.

The figure came with red removable chest and arm armor, and was armed with a string whip, which was recycled from Mattel's earlier Big Jim toy-line. Being one of the early figures to be continually reissued with each successive wave, late examples of the figure can be found with a hard, solid head as opposed to the more common hollow, "squeezable" rubber one. The 'solid head" version is far rarer.

The Weapons Pak, which consisted of existing weapons and armor, mostly in different colours to their original, included yellow versions of Beast Man's torso and arm armor (as well as his whip, in its original black). As a result, many examples of the Beast Man figure found on the second-hand market can be found to be wearing this yellow version of the armor. Some sellers even promote this as a variant version of the figure, but in actuality it is just down to previous owners mixing the parts up over the years, as Beast Man figures only ever came wearing the red version of the armor.

Later in the original toyline's run, Beast-Man also has the unfortunate distinction of being the character most often depicted being trapped and covered with evil green slime in the Evil horde's Slime Pit ending up as a slime monster who willingly obeyed Hordak's bidding.

Beast Man makes his debut in Mattel's very first illustrated books as Skeletor's closest and most loyal follower in the then quite small band of Evil Warriors. As the toyline expanded, he stayed at Skeletor's side as a ferocious man-beast who can summon most of the wild creatures of Eternia to aid Skeletor's schemes.

He appeared in the following minicomics:

Ooh, sneaky .Added by Temple.phoenix Beast Man appears frequently in the toy line's accompanying cartoon series by Filmation, introduced in the first episode "Diamond Ray of Disappearance". Although toned down slightly for the younger-child friendly series, as were many of the characters, his cartoon portrayal is generally consistent with his mini-comic portrayal, although in some early episodes the show's writers added extra dimensions to his character in that despite his loyalty, he clearly resents being bossed around by Skeletor and secretly desires to someday overthrow his master. This side of his character is brought to the forefront in the episode "Prince Adam No More", in which he is finally thrown out of Skeletor's crew. Feeling useless without the power of Snake Mountain behind him, he sets out to prove his worth by capturing King Randor by himself and bringing him to Snake Mountain. Although he succeeds in capturing the King, when He-Man comes to the rescue he is subjected once again to Skeletor's wrath and admitted back into his ranks purely so Skeletor has someone to vent his anger on. But his final line in the episode "It's kind of nice to be home" indicates he now feels he belongs as Skeletor's underling, and subsequent episodes portray him mostly for comedy value, willingly succumbing to Skeletor's abuse and constantly bungling his schemes. Notable episodes for Beast Man in the show's later stages include "The Shadow of Skeletor" and "Orko's Return" which restore him to his original, darker portrayal, working independently and craftily to achieve his aims. The powers of Beast-Man are shown effective in some earlier episodes, such as "Creatures From The Tar Swamp", "A Beastly Sideshow" and "The Dragon Invasion". His ability to control animals is not impeccable, however. For instance, he cannot control Cringer, Battle Cat, or Panthor.

Beast Man remained a fairly regular character throughout the run of the 1980s series, while some other earlier figures like Zodac, Mer-Man, Tri-Klops and Stratos gradually dropped out of sight when newer characters were released. He generally held his position as Skeletor's right hand man thoughout the cartoon's run, although in some later second season episodes this position was occasionally filled by characters such as Clawful or Whiplash, as writers attempted to promote newer characters more prominently. Beast Man was often teamed up with Trap-Jaw, one of the other earlier characters to remain consistent through the show's life.

Beast Man's background is never mentioned in the cartoon, although the series bible states a surprising origin for him, explaining he was once a thuggish human from Earth called Biff Beastman who owned a farmyard on which he constantly abused the animals. He was recruited as chief technician on the spacecraft piloted by Marlena Glenn, which crashlanded on Eternia, but he wound up on Skeletor's homeworld of Infinita, where he was mutated into Beast Man and recruited by Skeletor. This origin story appears in a storybook entitled "New Champions of Eternia" but was unpopular with most of the show's writers and therefore excluded from the series.

Beast Man is included in numerous MOTU storybooks throughout the 1980s. One such range of storybooks is the UK Ladybird Books which reveals he was the leader of a tribe of Beast People from the Vine Jungle. Although this background has never been mentioned in any of the more prominent MOTU incarnations (except for the DC Comics, which features the "Beastmen"), it is generally a popular concept amongst fans that he hails from a jungle tribe.

Beast Man also appears in the live action Masters of the Universe movie in 1987. Although credited as 'Beastman' (all one word), he is presented as "the Beastman" within the movie. Played by Tony Carroll, he is portrayed somewhat differently to other incarnations, appearing as a savage minion of Skeletor's, who merely growls instead of speaking. Although his lack of speech might indicate a lower level of intelligence than his usual depiction, the character is shown as capable of using high-tech weapons, working in a team and following orders. (He is also seen to carry a rather battered, simple sword at his waist, although is not seen actually using it in the movie.) When Skeletor incinerates Saurod for the broader team's failure, Beast Man clutches at his master's leg and makes a great show of begging for his life.

Redesigned by European comic artist Moebius, Beast Man has the same concepts as his familiar version, yet at the same time has a noticeably different appearance, with longer, browner fur rather than his usual orange, no tribal facepaint and a possibly Samurai-influenced new design for his chest armor.

Although drawn to resemble his film counterpart, Beast Man of the movie's comic book adaptation has more in common with the cartoon and toy versions. He talks and even replaces Blade as Evil-Lyn's helper during the scene of her interrogating Kevin Corrigan. The film makes no mention of his ability to control animals.

Beast Man returns in the 2002 relaunch of the MOTU toy line and series. Possessing essentially the same design as the classic version of the character, the 2002 Beast Man is depicted as being a physically much larger creature with a hunched back,. He is one of the largest revamped villains, rivaled in size only by Whiplash and Clawful. The figure's colour scheme is darkened down slightly, with deeper orange-red fur instead of the vintage figure's bright orange, and dark brown armor in place of the original's red. The figure's arm armor is now molded on (whereas the original's was removable), and now also sports similar armor on his lower legs. The action feature of this new version of the figure is his arms, which swing downwards when a button on his back is pressed. When the Four Horsemen originally designed the new version, they had planned for the figure to have a vocal 'roaring' feature, but this was eventually dropped due to production budget restraints.

His portrayal in the new cartoon series is much the same as the old, although in this incarnation he never shows any signs of desire to overthrow Skeletor, remaining permanently loyal to his master. Although he still possesses power over all wild animals, he has difficulty controlling dragons, as is showcased in the episode "Dragon's Brood".

Although his background is not mentioned in the show, the accompanying MVCreations comic series published an origin story for him (as Icons of Evil #1, written by Robert Kirkman and drawn by Tony Moore) in which he is revealed to originate from the Berserker Islands, where he first encounters Keldor before his transformation into Skeletor. He has remained subservient to Skeletor ever since he saved his life for the sake of recruiting him as his servant.

Although the MOTU Classics toyline that started in 2008 has, as yet, no supporting fiction, the toys' packaging do include short character biographies that merge elements from various different incarnations of the franchise as well as some newly-developed information to form a new, distinct "Classics" continuity. Beast Man's bio on his card back read as follows:

After being banished from his home in the Vine Jungle, the beast man named Raqquill Rqazz joined up with a young alchemist named Keldor™ during a skirmish in the Berserker Islands. Like others of his race, Rqazz has the ability to control beasts and monsters. He currently uses this particular talent as chief henchmen to Skeletor®, the Overlord of Evil™.

Part of the first wave of MOTU figures, Beast Man did not have any action features, other than the line's general waist-twisting action. The figure came with a string-like whip and removable armor in the form of a breastplate and two arm guards. The toy is notable for the blue markings on Beast Man, a design that was reduced to shadows under the eyes in the animated series.

The second figure features more points of articulation, as well as an actual action feature; a button on the back causes his arm to crack up and down, as either a whipcrack or a hammer punch, depending on whether or not he is holding his whip. The weapon, included with the figure, is now thicker and made of plastic. Beastman's armor is non-removable, with distinctive spikes along the back.

The figure is now noticeably hunched, with the head lower down to give him a more bestial appearance.

The newest figure, sculpted by the Four Horseman, is a redesign of the first figure, sharing mostly the same colours and overall design. As before, the figure comes with a whip and removable armor in the form of the classic breastplate/arm guard combo.

Like the other MOTU Classics, the toy now has full articulation at the ankles, knees, hips, waist, shoulders, elbows, wrists and neck. The overall sculpt is also far more detailed. 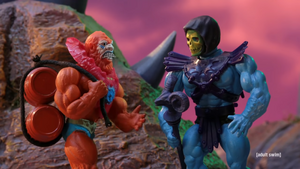 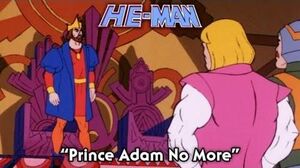 Retrieved from "https://villains.fandom.com/wiki/Beast-Man?oldid=3768360"
Community content is available under CC-BY-SA unless otherwise noted.