Villains Wiki
Register
Don't have an account?
Sign In
Advertisement
in: Mature, One Punch Man Villains, Webcomic Villains,
and 26 more

The Beast King is a villain from the manga/anime series One Punch Man.

He is one of the bio-engineered members of the House of Evolution and the second strongest member (behind Carnage Kabuto). He, Armored Gorilla and others were sent to capture Saitama so that he could be used on Dr. Genus' experiments.

The Beast King is a large, muscular creature, with noticeable animalistic features to that of a lion.

He is shown to mainly wear black fur around his body, which appears to be held together by his belt and chains. He also wears bracelets on his arms and ankles.

The Beast King appears to be a boastful, yet ignorant being, as shown when he still challenges Saitama to battle, even after witnessing him escape Ground Dragon's hole with no effort. Despite his ignorance, he was shown to have a bit of patience, as he waited for Saitama to clean up his belt before fighting him.

Beast king confronts Saitama with the help of Ground Dragon, who buries Saitama so that they could avoid a fight. Beast King threatens Saitama, who escapes from the trap and asks them to apologize. Enraged, Beast King attacks Saitama with consecutive slashes, which Saitama easily avoids.

During his rampage he ends killing two of his comrades, Slugerous and Frog Man, calling them weaklings and claiming that was the law of the jungle. Beast King the powers himself up and launches an even fiercer barrage of slashes, but Saitama counters with his Normal Consecutive Punches, which instantly pulverizes Beast King.

Despite the Beast King's brief appearance, Armored Gorilla stated that Genos wouldn't have been able to beat him, and Beast King himself was able to show off a couple of his powers and abilities when confronting with Saitama. These include: 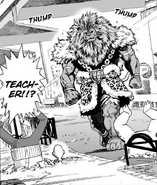 The Beast King approaching Saitama, as seen in the manga.

The Beast King, angered by Saitama.

The Beast King destroying a building through the pressure of his Lion Slash, showing off his destructive might.

Saitama dodging a Lion Slash in the anime.

Lion Slash Meteor Shower, as seen in the manga.

Lion Slash Meteor Shower, as seen in the anime.