Wandering the streets of Yharnam

Killing everything in their path for blood.

Beasts are the secondary antagonistic race in the 2015 roleplaying game Bloodborne. Once regular humans or animals, these werewolf-like creatures were affected by the Scourge plague, turning them into feral monsters obsessed with consuming blood.

Due to the ancient blood used by the Healing Church, the population of Yharnam fall under what is known as the Scourge, a plague sweeping across the entire population where their thirst for blood drives them mad, turning them into literal beasts. Scourge Beasts are notable for being the later stages of the scourge.

Scourge Beasts are a common type of beast. Formerly, people, the Scourge Beasts are monstrous wolf-like creatures due to the tainted blood of the church. Scourge Beasts look like typical lycanthropes, with a giant wolf-like appearance and a semi-humanoid physiology on all fours. Their fur ranges from blood-red to black and brown, and their eyes are always glowing white.

In Yahar'gul, when the Red Moon appears, a different strain of Scourge Beast is seen: these monsters retain the feral quadruped appearance but are no more werewolf-like, instead seem to be made of raw flesh and sharp bones fused together, showing a ribcage which looks like a maw and a mutilated leg where a tail should be.

Rabid Dogs are dogs made savage by the Scourge. They all possess wild, unkempt fur and wounds across their bodies as if they survived a fight, with glossy eyes that characterize those under the infection. They are commonly golden retrievers, though the rabid dogs found in the Hunter's Nightmare appear to be Dobermans. While just as feral as the other Beasts, they do seem to have some of their former loyalty to their masters since they are commonly seen accompanying Huntsmen.

Carrion Crows were the result of scavenger crows that would feast among the infected dead bodies of Beasts, infecting them with the Scourge. They are attracted to the smell of blood, so much so that when the player sees them, they will use their wings to drag their bodies - bloated and heavy from their gluttony - and attack them.

Carrion Crows appear very similar to common crows, but are noticeably larger. Their eyes glow white like most beasts, their feathers ratty and unkempt and their beaks are dripping with torn flesh from their victims.

In the Nightmare of Mensis, the carrion crows have the heads of rabid dogs.

As total beasts, the Scourge Beasts have no recollection of sentience of conscience, driven only by their insatiable thirst for blood. They do not speak or use tools like the Huntsmen and Large Huntsmen, though they are not usually seen wandering alone, usually accompanied both another one. 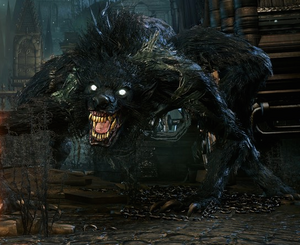 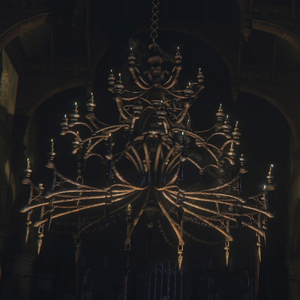 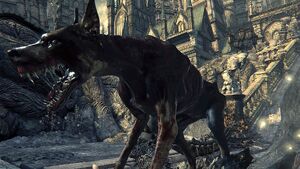 A Rabid Dog from the Hunter's Nightmare. 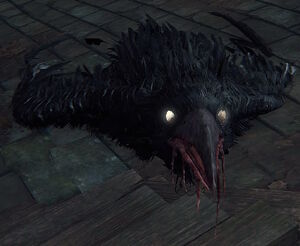 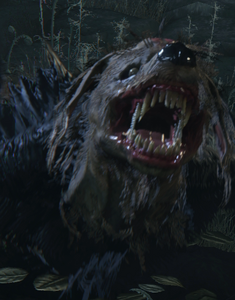 The Carrion Crows in the Nightmare of Mensis have the heads of Rabid Dogs.