Like all witches, her main hobby is murdering children, due to the fact they smell like "dog’s droppings" to her. When she goes to The Witches annual meeting at a hotel, she reveals what her true form looks like as she is bald and has scaly claws hidden by gloves. However, after hearing the Grand High Witch's plan to murder every child in England, this witch quietly tells another witch that they can't possibly do so. This is unlikely to be a moral objection, instead either balking at the scale of the task or believing it impossible to wipe out every single last one. Unfortunately for her, the Grand High Witch hears her and is enraged at her insubordination. Despite the witch's pleas for mercy, the Grand High Witch proceeds to inflict her most famous and feared punishment, "getting fried", on the hapless witch; she incinerates her on the spot with lasers from her eyes, leaving only a few tattered, smoking remnants of her dress and a pile of sooty ashes under her chair. This causes some other witches to become saddened but others find this really amusing like Pamela. The death of this witch served as a reminder to the other witches of the Grand High Witch's power and rank; according to Luke's grandmother, the Grand High Witch makes it a personal rule to "fry" at least one witch at every meeting, merely to keep the rest of them on their (metaphorical) toes and to remind them of their place.

Since she was killed by the Grand High Witch, she doesn't share the fate of other witches when they consume Formula 86 and turn into mice. 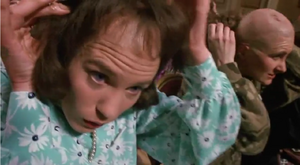 This witch removing a wig from her head. 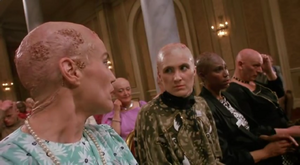 This witch expressing her doubts to the other Witch.