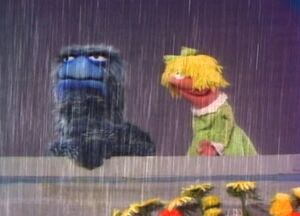 Beautiful Day Monster is a blue monster whose name is mentioned in a sketch "Beautiful Day" in "The Ed Sullivan Show". He was first used as the Crown-Grabber in unaired "Wheels, Crowns, & Flutes" snack commercials.

In the sketch "Beautiful Day", a female Muppet is enjoying a beautiful day outside when a mean monster arrives to spoil it. With a wave of his hand and a few grunts, he makes dark storm clouds appear, but the optimistic girl says that she likes rainy days as well. The monster proceeds to do whatever he can to ruin everything that the girl perceives to be beautiful. Since she enjoys the sound of a bird whistling, he shoots the bird. The girl tells him that he's awful—but he's so awful that actually he's beautiful, a beautiful example of perfect awfulness. Embarrassed and upset, the monster begins to shrink. When the monster is small enough, the girl smacks the monster with a flyswatter.

The monster also appeared on "The Muppets on Muppets", season one of "Sesame Street", among others.

Retrieved from "https://villains.fandom.com/wiki/Beautiful_Day_Monster?oldid=1856128"
Community content is available under CC-BY-SA unless otherwise noted.