Win money by entering White Fang in dogfights so he can fit in with society.

Beauty Smith is the main antagonist of Jack London's White Fang. He is a hideous dogfighter who buys White Fang to fight dogs, because he was bullied and forced to grow up on the outskirts of society because of his hideousness.

His vile appearance could be considered a hint to his nature: a hideous, distorted thing, hardly resembling a human in everything but basic shape. His head slants down to his neck uncompromisingly to meet a low and remarkably wide forehead. His large eyes are muddy and yellow and his face is prodigious. He has an enormous prognathous jaw that rests on his shoulder. His appearance is possibly due to the weariness of his slender neck, unable to support properly. His teeth are large and yellow, while his two eye-teeth showed under his lean lips like fangs. His hair is sparse and irregular of growth, muddy-dirty and yellow-dirty, rising on his head and sprouting out of his face in unexpected tuffs and bunches, in appearance like clumped and wind-blown grain.

Beauty Smith is a cruel, horrible man. He is an example of the equation of ugliness with spiritual meanness that is often present in stories, especially simple tales like White Fang. He is an excellent comparison with Grey Beaver and with Weedon Scott. Beauty rules by hatred. He bought White Fang because he saw the hatred and fierceness that was already instilled in the wolfdog. However, he uses hate to further White Fang's development. Grey Beaver is in the middle, ruling White Fang with mutual respect neutrally. Weedon Scott rules White Fang with love. When Beauty Smith is White Fang's master, this hatred turns itself in on White Fang; his hatred for Beauty Smith comes out in his fighting of their dogs.

White Fang becomes a professional fighting dog. Men make bets on him and he takes his hatred of Beauty out on the dogs and becomes known as "The Fighting Wolf." Even a lynx is pushed into his cage, but White Fang kills her; there are no fiercer animals to fight until the first bulldog named Cherokee in the Klondike and White Fang are brought together.

Cherokee and White Fang eye each other nervously in the circle. Neither is used to fighting this other type of dog and look at each other with confusion. Egged on by Tim Keenan, the bulldog makes a run for White Fang; he responds fiercely, yet is puzzled by the dog. Cherokee has a lot of thick flesh, and White Fang's teeth sink in, but it doesn't affect the bulldog. Cherokee is confused by White Fang's quickness. Finally, the bulldog sinks its teeth into White Fang's throat and will not let go. White Fang can do nothing to shake the dog off. Finally, just as White Fang is beginning to die, a wealthy gold hunter named Weedon Scott and his partner, Matt come into the midst of the fighting and separates the dogs. They pay Beauty Smith $150 for White Fang, even when he says that he won't sell him.

The two men try to tame White Fang and barely succeed, because it was White fang's first experience with love. When they're playing a game of cribbage, they hear a snarl and a cry outside. They hurry to the steps and see that White Fang has attacked Beauty Smith, who came with a club and a chain to try and steal White Fang back. 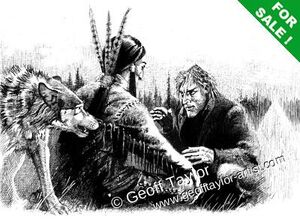 Beauty Smith trying to buy White Fang from Grey Beaver until he eventually tricks him into selling alcohol. 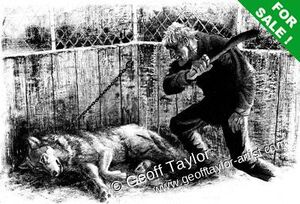 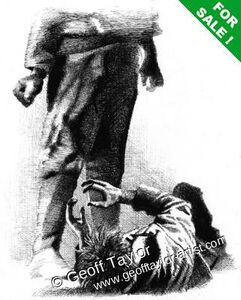