Get revenge on Judge Scott for sentencing him to prison (failed).

Beauty Smith is the main antagonist of the 1982 anime film Shiroi Kiba Monogatari, based on the 1906 novel White Fang by Jack London. He is an ugly and cruel man who tricks Grey Beaver into selling him White Fang. He turns White Fang into the "Fighting Wolf" by constantly tormenting him, both physically and emotionally until Weedon Scott forcefully buys him. He also plans to exact revenge on Judge Scott for sentencing him to prison.

He was voiced by the late Hōsei Komatsu.

When Grey Beaver, Mit-Sah and White Fang arrive in Fort Yukon, Smith's coachman almost runs over White Fang and Mit-Sah. White Fang confronts him and the coachman orders his boss to test White Fang with their fighting dog and White Fang wins. The sheriff arrives and the coachman and Mit-Sah try to tell him what happened until Smith comes out of the carriage and explains the situation was their fault, much to Mit-Sah's relief. The coachman tries to tell him that it's not what happened, but Smith tells him to treat their dog. Smith becomes friends with Mit-Sah for a little bit until he learns that White Fang is a wolf and tries to buy him from Mit-Sah until Grey Beaver intervenes and tells him that he's not for sale and leaves.

The following night, Smith and his coachman tell the sheriff that White Fang bit him before setting Grey Beaver's cabin on fire in order for them to get arrested so they can buy White Fang. Grey Beaver treats the money for his injuries for being bitten before White Fang is taken away and they get banished from Fort Yukon. Grey Beaver dies from a fall while Smith trains White Fang to become a fighting dog. Mit-Sah goes out to Dawson to rescue him while he meets a wealthy gold hunter named Weedon Scott on the way. Mit-Sah arrives in Dawson and enters White Fang's fight with a bulldog named Cherokee. Mit-Sah tries to convince Smith to stop the fighting before Smith kicks him out and tells him that he'll give him back when he's no use for him. Cherokee bites White Fang in the throat and Mit-Sah tries to save him, but the coachman holds him back while Smith continues to beat White Fang with his club. Weedon enters the fight and punches Smith in the face and pulls Cherokee off White Fang before buying the wolfdog from Smith. As Weedon and Mit-Sah leave, Smith asks Tim Keenan about the man who bought him and Keenan tells him that his name is Weedon Scott, which makes Smith remember the day that his father had sentenced him to prison and plans to kill him.

When Weedon, White Fang and Mit-Sah go onto the ship to San Francisco, Mit-Sah is kidnapped by Smith. When they arrive at the Scott mansion, Smith threatens Mit-Sah's life to keep White Fang quiet while he goes out to kill Judge Scott. White Fanf senses their presence and tries to stop him, but is held back by Alice Scott, not knowing that her family is in danger. Smith enters the house and strangles Judge Scott and reveals himself to be the same man he sentenced to San Quentin prison 20 years ago. As Smith points his gun to Judge Scott's head, Mit-Sah arrives and attacks him while White Fang breaks free from his cage and goes after Smith. Smith overpowers Mit-Sah and White Fang arrives in the scene and confronts Smith. Smith tells Mit-Sah to shut White Fang up, but Mit-Sah orders White Fang to attack him before they are both shot. The family arrives and discover Smith lying on the floor as he has been accidentally shot in the chest. The guards grab Smith and Mit-Sah walks over to White Fang's unconscious body and learns that he survived the shot. The guards decide to take Smith to a hospital after Judge Scott demanded them to do so and they don't have to put him back in jail. 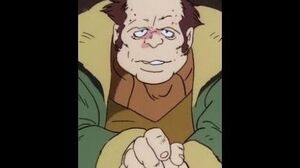