Beauty and the Beast Corps

The Beauty and the Beast Unit (also known as the BB Unit, or the B and B Unit,) is the main antagonist group of the video game Metal Gear Solid 4: Guns of the Patriots.

The special cybernetic suits worn by the Beauty members, combined with their fragile mental states, made them into lethal soldiers, which caused them to be exploited for their skills. Although their damaged minds gave them an edge in combat, it is also their greatest weaknesses. The suits of each Beast resembled animals after which they were named: Laughing Octopus possessed four tentacles (making a total of eight limbs); Raging Raven utilized flight; Crying Wolf was quadrupedal, complete with tail; and Screaming Mantis had multiple arms. Under their mechanical suits, members are connected to the outer suit via power lines and connectors.

They are implanted with nanomachines similar to those used to seal the mind of Big Boss. Each one is also equipped with a skin-tight catsuit that grants them the ability to control their external armored bodies in combat. If killed, the catsuits become charred and ashen, similar to Haven Troopers after their bodies are immolated by their nanomachines combusting. If simply incapacitated, the catsuits remain intact and unaffected.

Liquid Ocelot organized a group of mentally unhinged women with animal-like power suits entitled the Beauty and the Beast Unit, lead by Screaming Mantis. They, in 2014 (during the Guns of the Patriots Incident), were assigned to assist the PMCs in finishing off the remaining, rebelling militia and assassinate the elder war hero, Solid Snake (also in their mind killing Solid Snake would ease their anguish, and make them "whole" again).

Although technically a separate unit from the five PMCs that make up Outer Heaven, the various members of the BB Corps acted as field commanders for the various PMCs, namely those that shared the same namesake as them, such as Screaming Mantis for the Praying Mantis PMC, Raging Raven for Raven Sword, and so forth. Despite serving Outer Heaven, they could often prove difficult to control, such as when Laughing Octopus commenced wanton slaughter on a group of rebel prisoners, before being stopped by a throwing knife from Vamp, her superior. They had apparently done this multiple times, as several militia members were discussing their presence and actions, which Snake, at that time infiltrating the main hideout, overheard. Another instances of their reveling in brutality was when they were initially deployed into the Middle East, where they slaughtered a platoon of the local militia, which Snake later ended up witnessing, due to how that group of Middle Eastern Militiamen had nearly reached Liquid Ocelot's main base before he sent the BB Corps in to wipe them out before they could get any closer.

The killing of Snake proved to be unsuccessful, as one by one, Snake took them all down (either lethally or non-lethally depending on the player's choice). It is apparent that after their dependent non-lethal takedowns (should players choose to), they returned to be stable, normal human beings and acted like how they did before their traumatizing pasts.

All members of B&B corps. are suffered from Post Traumatic Stress Disorder for varying reasons and their mental instability served as the double-edged sword in combat. That, coupled with their frail body, necessitated the use of their respective combat suit to stay active and nanomachines to keep their destructive combat abilities at bay. Without their gear, they can burn anyone they touch upon contact, but unable to last long in the open. 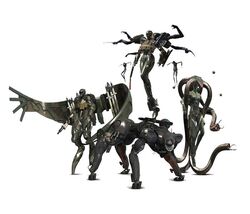 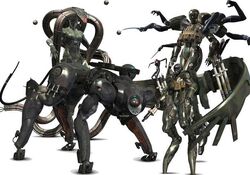