Wielding power-tools and other weapons of destruction

Doing stupid things.
Fighting and insulting each other sometimes.
Listening to rock music

Goals vary between episodes.
Get their TV back (Beavis and Butt-head Do America, succeeded).

Beavis and Butt-head are the titular protagonist villains of the franchise of the same name. They are best friends (and implied to be half-brothers).

Despite being the "heroes" of the show, they are actually good examples of protagonist villains, being extremely vulgar and idiotic with a tendency to exhibit extremely antisocial behavior towards every other character in the show (including each other).

Beavis and Butt-head are not exactly evil in the respect of wishing major harm on others, but they are also very much against the standards of what most would consider an acceptable social norm - this serves to make them heroes to some and obnoxious antagonists to others, in truth, though the duo are more amoral in nature: though they definitely have criminal leanings. Their stupidity has caused them to engage in criminal activity without even being aware of the dangers, as well as do a lot of damage unintentionally. However, after witnessing their unintentional chaos, they usually end up saying "That was cool" before laughing at the mess.

Beavis was especially prone to having a pyromaniac personality until controversies caused the creators to edit out his more extreme fire-raising stunts, despite this Beavis is actually the more passive of the duo while Butt-head provides a more aggressive attitude: Butt-head is also known to enjoy regularly abusing Beavis - despite this, the two remain friends.

They were voiced by the series' creator Mike Judge, who also voiced other characters in the franchise, including Principal McVicker.

Beavis and Butt-Head are very dimwitted, ignorant, incorrigible, argumentative, and unaware of their actions when it comes to the personalities of the duo. Their extremely high degree of stupidity comes from the lifelong lack of adult supervision. They have very poor social skills, especially with women, given their awkward attempts at gaining their attention, typically accompanied by misogyny. Their stupidity and single minded goals have caused much destruction and harm to others around them and even each other. Butt-head is quicker to resort to violence given his well-known slapping of Beavis. However, Beavis loses his temper significantly easier than Butt-head. Butt-head is usually the instigator in such situations, yet he is bizarrely calm. Though, on a few occasions, Beavis has stood up for himself. For example, the episode "Murder Site", Beavis, after being repeatedly called a "Buttknocker" by Butt-head (a name he greatly despises) Beavis snapped and actually tried to murder Butt-head. Butt-head has an extra, albeit small, fragment of intelligence and heightened awareness not seen in Beavis and can usually deduce the obvious around himself, and therefore isn't a TOTAL idiot. Butt-head also may be sociopathic as he doesn't really seem receptive to Beavis's suffering and finds anything chaotic and devastating "cool". Beavis is hardly aware of his surroundings and has various mental health issues alongside his room temperature IQ. Beavis has multiple personality disorder manifesting as "the Great Cornholio." Cornholio is awakened by excessive consumption of stimulants such as caffeine or sugar. Cornholio will do whatever he can to remain dominant and tends to speak in an odd faux Spanish accent. He also reveres a deity he refers to as "the almighty bunghole". Beavis also seems to have ADHD, as he tends to be almost constantly restless and has to verbalize almost constantly. 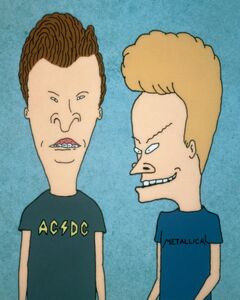 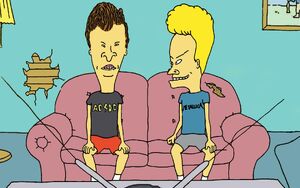 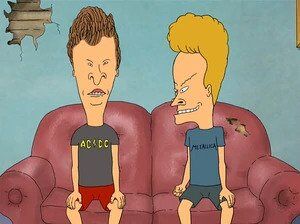 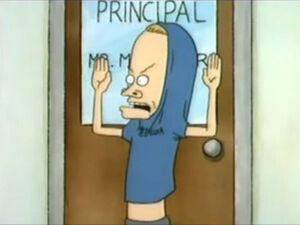 Beavis as his alter-ego, the Great Cornholio. 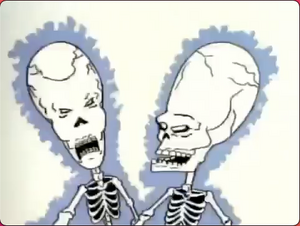 Beavis and Butt-Head electrocuted while touching the Bug Zapper. 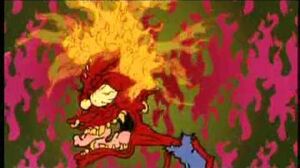 Beavis and Butthead freakin' out in desert