Wielding power-tools and other weapons of destruction, lack of fear

Beavis and Butt-head are the titular protagonists of the franchise of the same name. They are best friends.

Despite being the "heroes" of the show are actually a good example of a protagonist villain, being extremely vulgar and idiotic with a tendency to exhibit extremely antisocial behavior towards every other character in the show (including each other).

Beavis especially was prone to having a pyromaniac personality until controversies caused the creators to edit out his more extreme fire-raising stunts, despite this Beavis is actually the more passive of the duo while Butt-head provides a more aggressive attitude: Butt-head is also known to enjoy regularly abusing Beavis - despite this the two remain friends.

The two are stupid, perverted, ignorant, incorrigible, and do not seem to be aware of their actions when it comes to the personalities of the duo. They are extremely terrible at trying to get women's attentions and are very misogynistic. 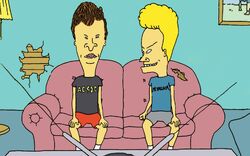 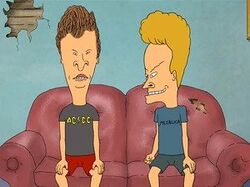 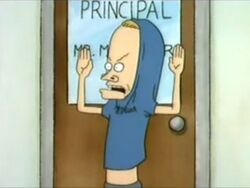 Beavis as his alter-ego, the Great Cornholio.
Add a photo to this gallery

Beavis and Butthead S02E09 Home Improvement
Add a photo to this gallery
Retrieved from "https://villains.fandom.com/wiki/Beavis_and_Butt-head?oldid=1719775"
Community content is available under CC-BY-SA unless otherwise noted.