He was a high-tech master thief who worked for Ivan Steranko until the two were captured and mutated by Shredder and forced to work for him as a result.

He was voiced by J.B. Smoove.

At some point in his acquaintance with Ivan Steranko, Zeck shot the Russian crime boss in the eye (supposedly by accident), resulting in Steranko adopting his trademark diamond eye. Steranko later offered Zeck a chance to make up for this error by stealing the Kuro Kabuto, helmet of the Shredder, so that Steranko could add it to his collection of artifacts. Zeck successfully broke into the Shredder's lair and stole the helmet despite running afoul of Rahzar and several Foot Bots, but while invisible, he was hit by the Shellraiser. The Turtles got Zeck's bag and the helmet, but Zeck managed to plant a tracker on the Shellraiser and later knocked it over with a bomb.

Zeck avoided getting involved in the fight between the Turtles and the Shredder's mutants, but in attempting to retrieve the helmet from Leonardo was soundly defeated. Leo returned his bag, but damage from the night's adventures left Zeck unable to cloak himself. He was rescued by Steranko, but then discovered that Leo had taken from the helmet from his bag and replaced it with diapers taken from a city dumpster.

Months after the Kraang took over the city, Steranko and Zeck are stuck in Steranko's hideout with nothing to eat but cockroaches and ketchup. They came up with a plan to get out of the city, they would find Shredder's daughter and trade her with him for a safe way out of the city, as the last thing they wanted was to be mutated by the Kraang like the other humans in the city. But the plan did not work as intended, as the turtles released Karai. As punishment, Steranko and Zeck were mutated by the Foot, being turned into a rhinoceros and warthog, respectively.

In the next episode, "The Pig and the Rhino", which takes place directly after the last one, Steranko and Zeck are furious after their mutation and try to attack Shredder, only to be easily defeated. After being forced to work for Shredder, Zeck and Steranko are sent to recapture Karai and bring her to him, only to neglect this duty to seek vengeance on the turtles for ruining their deal at the docks. They soon systematically defeat Donatello, April, Raphael and Casey Jones, kidnap them and steal their T-phones in order to locate the remaining two. After tracking Michelangelo and Leonardo to Coney Island, the duo try to lure them out by threatening their friends, only for Leonardo to free them instead while Steranko and Zeck being distracted by Mikey's attempts to give the mutant names, eventually seeing an advertisement for a Bebop and Rocksteady concert, and giving them the names Bebop and Rocksteady (which Zeck takes a disliking to). Realizing that they've been tricked, Bebop and Rocksteady try to use the turtle's retro-mutagen to cure themselves, only to be defeated by the turtles, April, Casey and Snake-Karai. Afterwards, the two encounter Karai again and capture her, completing their original mission.

In the "Noxious Avenger", Bebop and Rocksteady battle the turtles while collecting chemicals to create Shredder's brain worms and accidentally drop a canister of mutagen on local sewer worker, Garson Grunge, mutating him in to Muck-Man. Fed up with being bossed around by Shredder and his henchmen, the duo manipulate Garson int thinking the turtles mutated him and use him to carry out their own nefarious deeds, until the truth is revealed and they are defeated.

In "Attack of the Mega Shredder", after Leonardo and Michelangelo are captured by the Foot Clan, Bebop and Rocksteady watch them while Shredder and his minions are preparing to "double-mutate" them, only to be tricked into throwing the three Shredder mutants into the vat, planning to combine them with the turtles to create a giant super mutant, but instead create the titular Mega Shredder.

In "Annihilation Earth Part 2", Bebop briefly captures April when she and Splinter try to infiltrate Shredder's lair and convince him to help them fight off the Triceraton Empire and he and Rocksteady join him and his other minions when they decide to team up. Along with everyone excluding the turtles, April and Casey Jones, Bebop and Rocksteady are both killed when Shredder (quite literally) back stabs everyone by killing Splinter, preventing him from stopping the Black Hole Generator. However, they are saved when the six survivors and the alien cyborg, the Fugitoid, time travel and prevent Shredder from killing Splinter and the Black Hole Generator from going off.

In "City at War", Bebop and Rocksteady are seen guarding the now sick and dying Shredder at the end of the episode.

In the next episode, "Broken Foot", Bebop and Rocksteady accompany Tiger Claw and help him protect the Alumon Chemicals factory and the Foot-Bot assembly factory from Karai, Shinigami, Leonardo and the other turtles.

In "The Super Shredder", Rocksteady, Bebop and multiple Elite-Foot Bots appear at the end of the episode and burst through the wall in front of the Undercity, encountering the Turtles, April and Karai.

In "Darkest Plight", which takes place directly after the last episode, they are seen fighting the Turtles, April and Karai. After bursting through the wall, Bebop and Rocksteady argue about weather they should squish or blast the Turtles and are then easily tricked by Michelangelo, who delays them long enough for Raphael and Donatello to sneak up and defeat them. After climbing out of the chasm in the Undercity, Super Shredder orders them to search the chasm for Splinter, believing that he may still be alive. Bebop and Rocksteady initially argue over who will go first, but they then decide to simply ambush the Turtles after they have found Splinter and Bebop uses his suit to make them invisible. However, one of Casey Jones' hockey pucks ends up hitting the invisible Bebop right in his snout, blowing their cover. The two mutants then engage Raphael and Casey in a fight and end up losing due to their incompetence.

Zeck normally talks in rap and body movements.  A flamboyant thief, he also tends to show how slick he is when he steals and enters areas where he is supposed to steal something. He constantly dances around and talks while he is invisible, which isn't very bright. He makes references to Michael Jackson by moonwalking and saying "hee-hee" and "shamone!".

Zeck is equipped with a range of high-tech gizmos such as a cloaking device, an energy Mohawk and a backpack that can allow him to slide up or down a wall.  His invisibility suit is charged by two double A batteries. He also has a belt on his waist that shoots lasers from different angles. 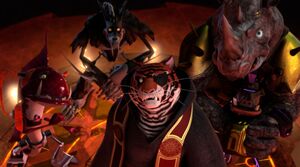