Henchmen/servants of the Shredder and the Foot Clan.

Rhinoceros and warthog traits
Various weapons (depending on the version)

Help Shredder and the Foot Clan (and Krang in the 80's series).

Defeat the Turtles and their allies and take over New York and/or the World (failed).

Bebop and Rocksteady are major antagonists in the Teenage Mutant Ninja Turtles franchise. Although interpretations vary, they are almost always depicted as the dimwitted mutant henchmen of the Shredder, leader of the Foot Clan. Their names are both taken from genres of music: Bebop is a style of jazz, while Rocksteady is a Jamaican music style, a precursor to reggae.

Prior to being mutated, Bebop and Rocksteady were part of a street gang in New York City that was employed by Shredder. Rocksteady was originally a short and stocky blond Caucasian man (who sported army camouflage pants that would be replaced with simple beige cargo pants later while also occasionally sporting a strong Army helmet on his head in his mutated form). Bebop was a taller African American man with a purple mohawk. With the other members of their gang, they were sent out to stop a Channel 6 reporter named April O'Neil from doing a report about crime in the city. April ran down into the sewers while being chased by the street gang and met the Teenage Mutant Ninja Turtles, who then defeated the gang in a fight.

After this humiliating setback, The Shredder developed a plan to defeat the Turtles by mutating members of the street gang, so that they would have abilities parallel to the Turtles'. Bebop and Rocksteady both volunteered to undergo the procedure (though neither was particularly aware of what it would entail) with the promise that it would allow them to exact revenge on the Turtles. Bebop was mutated into a humanoid warthog, and Rocksteady into a humanoid rhinoceros.

However, though the transformation did make them larger and stronger, they remained incompetent simpletons and were completely inept at stopping the Turtles or carrying out Shredder's plans. For example, in "Enter the Shredder" they charged at the Turtles, who jumped, and crashed they into each other. Donatello commented that their mutations didn't "up their IQ's any."

For most of the series they were employed for the Foot Clan's purposes however, the Turtles certainly consider them to be formidable (despite their stupidity) in combat due to their great strength and endurance, and as such, often use their intelligence to outwit them rather than fighting them in a straightforward manner. In one episode of the series, Bebop was shown to have kept a pet turtle, which got mutated into the evil turtle Slash.

They made a reappearance in the made-for-TV movie Turtles Forever. Their incompetence is still shown, although it ended up saving the 2003 Shredder when Rocksteady accidentally tripped over and unplugged a laser that was about to destroy him. However, Bebop ended up obliterating the 2003 Shredder anyway, when he re-plugged the same laser device, all the while thinking their Shredder would be pleased that they "fixed" his machine.

Bebop and Rocksteady appears as recurring villains in the archie comcis version of tmnt where they would work for the Shredder before going on their own.

Bebop and Rocksteady appear in the IDW version of TMNT where they were more dangerous than their 1987 counterparts.

In the 2012 Nickelodeon series, Bebop and Rocksteady were introduced as master thief Anton Zeck and Russian arms dealer Ivan Steranko. Before joining the Foot Clan, Steranko fought as a volunteer in the wars in Iraq, Yugoslavia and the DR Congo. These incarnations of Bebop and Rocksteady are more intelligent and competent than their other counterparts while maintaining their role as the comic relief.

Steranko first appeared in "Enemy of My Enemy", making a weapons deal with the Shredder, until he was accidentally defeated by the Turtles' failed attempt to take out Shredder.

Steranko and Zeck both appeared in "The Legend of the Kuro Kabuto", in which Steranko hired Zeck to steal Shredder's helmet (the titular object). Zeck managed to break into Shredder's lair and steal the helmet, only to be accidentally run over by the Ninja Turtles and have the helmet stolen from him. He later chased after Leonardo, who gave him the helmet so that Rahzar, Fishface, Tiger Claw and StockmanFly would pursue him instead. Zeck was then saved by Steranko, only to discover that Leo had switched the helmet with a bag of dirty diapers at the last minute.

Steranko and Zeck next appeared in "Serpent Hunt", as two of the few humans left in New York after the Kraang invasion. Starved and desperate, the two tried to escape New York by capturing Karai (who was mutated into a snake and was missing) and giving her to Shredder in-exchange for being able to leave the city. The duo eventually capture Karai and bring her to the docks to make the deal with Shredder, only to be interrupted by the Turtles, resulting in them being captured by Shredder and his minions. Furious after they kidnapped Karai and learning Steranko was behind the theft of his helmet, Shredder and his minions threw the duo into a vat of Stockman's specially prepared mutagen and mutated them into a warthog and a rhinoceros.

In the next episode "The Pig and the Rhino", which takes place directly after the last one, Steranko and Zeck are furious after their mutation and try to attack Shredder, only to be easily defeated. After being forced to work for Shredder, Zeck and Steranko are sent to recapture Karai and bring her to him, only to neglect this duty to seek vengeance on the turtles for ruining their deal at the docks.

They soon systematically defeat Donatello, April, Raphael and Casey Jones, kidnap them and steal their T-phones in order to locate the remaining two. After tracking Michelangelo and Leonardo to Coney Island, the duo try to lure them out by threatening their friends, only for Leonardo to free them instead while Steranko and Zeck being distracted by Mikey's attempts to give the mutant names, eventually seeing an advertisement for a Bebop and Rocksteady concert, and giving them the names Bebop and Rocksteady (which Zeck takes a disliking to).

Realizing that they've been tricked, Bebop and Rocksteady try to use the turtle's retro-mutagen to cure themselves, only to be defeated by the Turtles, April, Casey and Snake-Karai. Afterwards, the two encounter Karai again and capture her, completing their original mission.

In the "Noxious Avenger", Bebop and Rocksteady battle the Turtles while collecting chemicals to create Shredder's brain worms and accidentally drop a canister of mutagen on local sewer worker, Garson Grunge, mutating him in to Muck-Man. Fed up with being bossed around by Shredder and his henchmen, the duo manipulate Garson int thinking the Turtles mutated him and use him to carry out their own nefarious deeds, until the truth is revealed and they are defeated.

In "Attack of the Mega Shredder", after Leonardo and Michelangelo are captured by the Foot Clan, Bebop and Rocksteady watch them while Shredder and his minions are preparing to "double-mutate" them. Afterwards, the Turtles trick Bebop and Rocksteady into throwing the three Shredder mutants into the vat, planning to combine them with the turtles to create a giant super mutant, but instead create the titular Mega Shredder.

In "Annihilation Earth Part 2", Bebop captures April when she and Splinter try to infiltrate Shredder's lair and convince him to help them fight off the Triceraton Empire and he and Rocksteady join him and his other minions when they decide to team up. Along with everyone excluding the turtles, April and Casey Jones, Bebop and Rocksteady are both killed when Shredder (quite literally) back stabs everyone by killing Splinter, preventing him from stopping the Black Hole Generator. However, they are saved when the six survivors and the alien cyborg, the Fugitoid, time travel and prevent Shredder from killing Splinter and the Black Hole Generator from going off.

In "City at War", they are seen guarding the now sick and dying Shredder at the end of the episode.

In "Broken Foot", they accompany Tiger Claw and help him protect the Alumon Chemicals factory and the Foot-Bot assembly factory from Karai, Shinigami, Leonardo and the other Turtles.

In "The Super Shredder", Rocksteady burst in to Stockman's lab when he hears Shredder screaming, only to become horrified when he sees him mutated into his new Super Shredder form. He and Bebop, along with multiple Elite-Foot Bots, appear at the end of the episode and burst through the wall in front of the Undercity, encountering the Turtles, April and Karai.

In "Darkest Plight", which takes place directly after the last episode, they are seen fighting the Turtles, April and Karai. After bursting through the wall, they argue about weather they should squish or blast the Turtles and are then easily tricked by Michelangelo, who delays them long enough for Raphael and Donatello to sneak up and defeat them. After climbing out of the chasm in the Undercity, Super Shredder orders them to search the chasm for Splinter, believing that he may still be alive. Bebop and Rocksteady initially argue over who will go first, but they then decide to simply ambush the Turtles after they have found Splinter and Bebop uses his suit to make them invisible. However, one of Casey Jones' hockey pucks ends up hitting the invisible Bebop right in his snout, blowing their cover. The two mutants then engage Raphael and Casey in a fight and end up losing due to their incompetence.

In "The Foot Walks Again", When Shredder and Krang maniacally disparage the captured turtles, Bebop notes that their two 1987 villains are even more dumber than them, which Rocksteady agrees to. After the two Teenage Mutant Ninja Turtles managed to escape the Technodrome, Bebop and Rocksteady are insulted again by Shredder for letting the turtles flee, only this time the rhino and the warthog have more than enough of his insults and demand more respect. Bebop and Rocksteady then invade an Earth Protection Force base to successfully recover a microchip despite the intervention of the turtles and their allies.

Bebop and Rocksteady 1987 are seen again at the end after the Turtles and the Shredders and Krangs from their dimension return. Expecting to get their butt kicked again by the turtles, Bebop and Rocksteady are rather encouraged to give up their bad ways and do with their lives as they please. Rocksteady admits while he always wanted to be a personal injury lawyer while Bebop wants to become a dancer.

Main article: Bebop and Rocksteady (Out of the Shadows)

Bebop and Rocksteady made their debut in a live-action TMNT film in Out of the Shadows.

In the trailer, they arrive where the Ninja Turtles are. Leonardo, Raphael and Donatello are all scared stiff by their appearance, while Michelangelo compliments Bebop for bringing back the mo-hawk. Bebop gets annoyed that they're not being taken seriously, and they charge at the turtles with Bebop tackling Leonardo and Rocksteady tackling Raphael to the ground. The two will be equipped with their own motorcycles and Rocksteady is seen chasing Casey Jones in a parking garage on foot while hurling away the cars he barges into to catch Casey. Rocksteady also commandeered a tank and attacks the Turtles using it in a river. 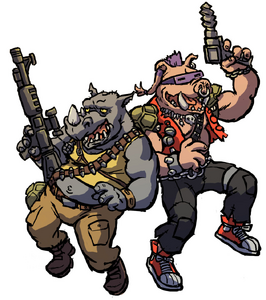 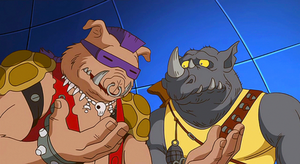 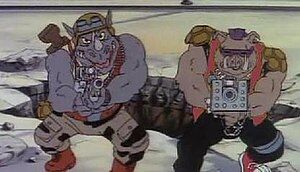 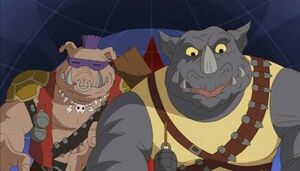 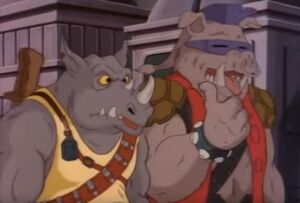 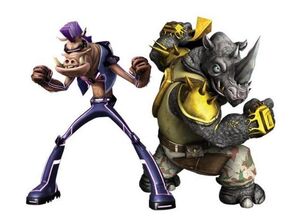 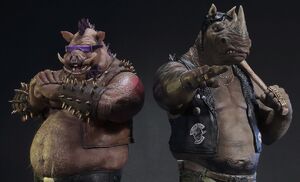 Retrieved from "https://villains.fandom.com/wiki/Bebop_and_Rocksteady?oldid=4014105"
Community content is available under CC-BY-SA unless otherwise noted.