Being the most popular girl in Birmingham High School no matter how many people have their lives destroyed (succeeded).

Power-Hungry Sadist
Becca Abrams was the main antagonist of Cold Case episode "Stand Up and Holler". She was a senior at Birmingham High School in 1997. Becca was captain of the cheerleading squad, pretty, and popular, but she had an extremely cruel and manipulative personality. The cheerleading squad was described as a "shark tank" and Becca was the "Great White". When one of the junior cheerleaders, Rainey Karlsen, finally stood up to her, Becca took brutal revenge and was largely responsible for Rainey Karlsen's death.

On September 1, 1997, Becca made the final selections for which juniors would join the varsity cheerleading squad. Noticing that Rainey's tryout quickly drew the attention of Becca's football player boyfriend Casey Evans, Becca quickly gave the open spots to Rainey and her best friend Celeste Church.

Despite Casey's obvious interest, Becca would later say she wasn't threatened by Rainey, because she was "clueless when it came to guys". In fact, she quickly welcomed Rainey into her clique at first, and inviting her to parties. Celeste would later suggest Becca wanted to control Rainey. Becca was much less friendly to Celeste, often ignoring her or make cruel remarks about her weight.

Becca also discouraged Rainey from speaking up in Coach Pruit's physics class. When Joe Vives-Alvarez, another student in the class, called Rainey "pathetic" for conforming to what Becca said, Becca simply called him a "freak" and ignored him.

After their first game, Becca and the other cheerleaders took Rainey and Celeste to the locker room. As part of a hazing ritual, she told them to kiss each other, not telling them that Casey and the other football players were watching. Rainey refused, but Celeste, eager for Becca's approval, kissed Rainey before she could say anything. When the football players began chanting and taunting the two, Rainey, disturbed to see Coach Pruit among them, stormed off, leaving Celeste alone in the locker room with the boys (Becca had prepared Rainey and Celeste for a multiple rape as the final part of hazing. Something really awful)

Later, during the physics class, students were expect to give an oral presentation on an aspect of physics. Becca gave a brief, sensual, but utterly uninformative presentation and sat back down. Rainey spoke up, demanding to know why Becca could get away with that. Coach Pruit tried to dismiss Rainey (and Joe, when he supported Rainey), but Rainey simply stormed out of the class, with Joe following.

Sometime following the after-school pep rally, which Rainey missed, Becca, Celeste, and the other girls were drinking beers on the football field, where Becca passed around a small bottle of Liquid X. Rainey showed up to tell Becca she was going to leave the squad because she didn't want to become as evil, manipulative and vapid as Becca. When Rainey tried to leave, a furious Becca had two girls hold Rainey down, then took Celeste's beer and forced it down Rainey's throat.

Becca was disturbed when Rainey suddenly started choking and gagging from the single beer. She didn't realize Celeste had poured the whole bottle of X in her beer, after Becca had made yet another cruel joke at her expense (she wanted to commit suicide because of Becca's cruelty, but it was Rainey who ended up dead).  Becca and the other girls ran off, leaving Celeste alone on the field with Rainey, who died soon after. The authorities assumed her death was an accidental drug overdose.

Becca's life of popularity at Birmingham continued on, but the years following high school weren't as nice to her. She had trouble holding down jobs, and by the age of twenty-eight, she'd already been divorced twice.

In 2007, she was relive some of her glory days when she organized her high school's ten year reunion. It was around this time that detectives took a second look at Rainey's death, believing someone may have killed her. Detectives Lilly Rush and Will Jeffries questioned Becca at the school. Becca scoffed at the suggestion that she saw Rainey as a rival and instead told them of Rainey and Joe's initial tension in class to deflect away from herself. Lilly, who took and instant dislike to Becca, was skeptical until Becca told her of a rumor that Joe was expelled a few months after Rainey's death for making Liquid X in the school chem lab.

After quesioning Joe, Casey, Coach Pruit, and Joe again, the detectives were led back to Becca, and showed up at the reunion to confront her. Becca tried to avoid them, but was cornered in the locker room by Lilly. After a reminder of how bad her life had been after high school, Lilly goaded Becca into revealing what she'd done to give Rainey a lesson. Lilly then arrested Becca on the spot for her important role in Rainey's death, and "Great White" Becca had to endure the humiliation of being escorted out in handcuffs in front of her former classmates. 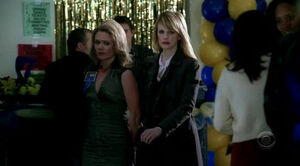 Becca arrested
Add a photo to this gallery
Retrieved from "https://villains.fandom.com/wiki/Becca_Abrams?oldid=4377173"
Community content is available under CC-BY-SA unless otherwise noted.