Bed of Chaos
Godmother of Pyromancy
Mother of Demons

Recreate the First Flame.
Keep the Age of Fire going (both failed).

The Bed of Chaos (formerly known as the "Witch of Izalith") is the overarching antagonist of the Dark Souls video game series. She was once a wielder of the First Flame and one of the founders of the Age of Fire, is now been transformed into a monstrous and twisted bed of life due to her attempts to recreate the First Flame. Due to her being responsible for the existence of demons within the mortal realm, she arguably serves as the Bigger Bad of the entire series.

Long ago, during the Age of Ancients, the world was unformed, with no light or dark, no life or death. All that existed were the Everlasting Dragons, and the Archtrees they called their homes. However, At some point, a fire came into being in the bowels of the Earth, known as the First Flame. The flame brought disparity; life and death, light and dark. At some point, humanoid beings came into existence, and drawn to the flame, four of them found great souls of lords in the fire. The Witch of Izalith found one of the Lord Soul, the Life Soul, which she used to fight off the dragons by weaving great firestorms with her daughters of chaos.

Along with his fellow lords, and a host of other gods and warriors, Lord Gwyn made war against the Everlasting Dragons above. When one of the dragons' own, Seath the Scaleless, betrayed their secret weakness, Gwyn and his lords were able to defeat the dragons, and make the world their own, thus beginning the Age of Fire. Like Gwyn, the Witch of Izalith became a god in the new world and ruled over her homeland of Izalith.

As the fire faded, leading to the end of the Age of Fire, the Witch of Izalith began to experiment. While Gwyn set out to kindle the first flame to keep it going, the Witch of Izalith wanted to recreate the first flame and make her own. This went horribly wrong, accidentally creating the Flame of Chaos, turning her into the Bed of Chaos. The flames spread across Izalith, transforming all there into demons, with Quelana the only one to escape unscathed.

The Bed of Chaos eventually meets its end at the hands of the Chosen Undead, using its lord soul to reach the First Flame.

Long after the Bed of Chaos's death, the fire was linked and faded again many times, and the land of Lordran that Gwyn had once ruled saw the rise and fall of countless kingdoms.

However, the Witch's powerful soul would remain would be reborn time and time again. By the events of Dark Souls II, the Witch had been reincarnated into the form of the Lost Sinner, an imprisoned undead in Sinner's Rise.

Long since the death of the Chaos Flame, the demons that spawned from it became a dying race. Like lava cooling on the surface, the flames that sustain the demons slowly die before they all harden into stone. A Demon Prince was born to link the Chaos Flame and prevent it from fading, but his defeat by Prince Lorian prevented him from doing so.

When she was the Witch of Izalith, she was noticeably human-looking, wearing an ornate set of pyromancer robes. He hands display burn-scars, not surprising as a pyromancer.

As the Bed of Chaos, she takes the form of a massive entanglement of roots growing from the walls of a capital, forming into a vaguely humanoid form. On top of this figure stands a vaguely humanoid construct of fire with long arms, one with a large scythe blade. Within the roots of this figure sits a Chaos bug, which kills the Bed of Chaos if killed.

As the Witch of Izalith, she held great power and sway granted to her by her Lord Soul. She was very intelligent, not only having discovered and perfected pyromancy, but she was able to use it to slay the everlasting dragons and was even able to make Izalith a prosperous city.

As the Bed of Chaos, she wields the Flame of Chaos, a divine similar to the First Flame that twists those that touch it, turning them into demons. 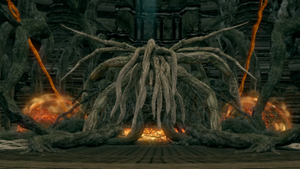 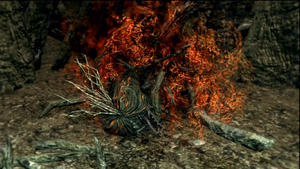 The Chaos Bug found inside the Bed of Chaos. 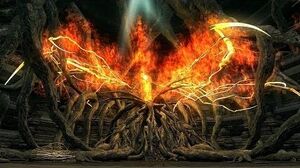 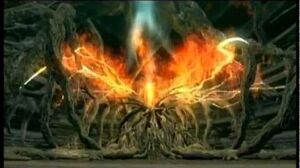