Beelzeboot, also known as the 'Canadian Devil, is the main antagonist from the South Park episode "Freemium Isn't Free".

The naming of Beelzeboot is derived from the devil of gluttony called 'Beelzebub'.

Beelzeboot first appears as the Canadian Minister of Mobile Gaming, and had worked with the Canadian Prince to make a crappy Terrance and Phillip mobile game. This game was initially free, but used micropayments to scam people out of money. Stan becomes addicted to this game, and ends up spending thousands of dollars on it after Jimmy pushed it on him. Near the end of the episode, Beelzeboot reveals himself, and says that since the Prince of Canada signed a contract, the souls of all Canadians belong to him. The normal devil realizes that Beelzeboot is behind the mobile game, and, taking control of Stan's body, battles him and apparently wins. 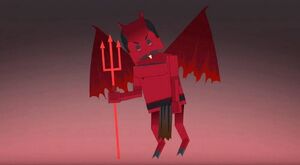 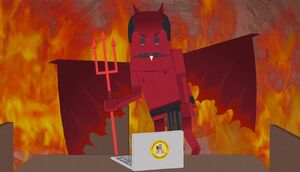 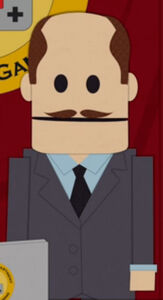 Beelzaboot in his human form.