Developing strange hobbies during her exile (e.g. Building a castle for herself in the void)

Beelzebub is the overarching antagonist in Helltaker. Having initially appeared as a terrifying-looking beast who acts as a companion of the Helltaker by acting as a narrator of the game story, it was revealed that Beelzebub herself is an extremely powerful demon who was banished by the previous Hell prosecutor, Justice, into the Abyssal Void due to an unspeakable atrocity she had committed. However, towards the end of the game, Beelzebub reveals herself to be a refined lady with a polite attitude that the titular Helltaker encounters in the secret ending of the game as he, along with her, are stuck in the abyssal void that the former had opened.

When Beelzebub appeared for the first time in the game, she appeared as a grotesque yet terrifying fly beast with a white mane and a skull-like face. Most of the time, people can depict her design as an overweight gorilla with six arms and fly wings that was made to look like a fly as this was befitting to her nature as "The Great Fly" demon.

However, if the Helltaker ends up encountering her in the Abyssal Void in the secret ending, Beelzebub appears as a refined lady with short and red white hair and long white horns that looked like a fly and much like other demons, she also has a black demon tail. In addition, she also wears a red refined tuxedo with red gloves and white fly-like buttons, a fly-like ribbon on her chest and fly-like bracelets on both hands. In one of the scenes, Beelzebub unbuttons the top part of her tuxedo which reveals her as being somewhat well-endowed.

For the most time of the story, Beelzebub herself appears as a cordial demon companion towards the Helltaker as she gives some advice and motivation to have him reach his own goal obtaining a harem full of demon girls while also spending as a jovial narrator trying to tell an epic story for Helltaker's players. Despite this, her narrations can be perceived as a bit unreliable due to her insanity after being trapped in the void for so long to the point she preferred to leave things unanswered.

Beneath her jovial attitude however, Beelzebub herself is revealed to be an ancient demon who got banished to the void by the original demon prosecutor, Justice, after committing unspeakable atrocities in the past. She is also revealed to be a malicious trickster, attempting to lure the Helltaker into the abyssal void under the pretense that he would become the king of Hell.

Despite her trickery, Beelzebub herself seems to have no ill-will towards Lucifer, even calling her with her own nickname, despite vowing that she will escape someday as Lucifer attempts to close the portal that the Helltaker had opened. In addition, after being trapped in the abyss for so long, she also develops several kind of strange hobbies in order to alleviate her own boredom.

When players access the game for the first time, they encounter Beelzebub in an endless void who then ended up telling the players about the epic story of the Helltaker and his quest of going to Hell, in order to obtain a demon harem he had dreamed. As a result, Beelzebub then becomes an official companion for them in the end. When the Helltaker asks Beelzebub for advice in the first stage, she simply reminds him that he hasn't found any demon harem to his liking yet and asks him to keep fighting until he gets one, while asking him not to mind her business as she was just a mere narrator while perceiving herself as a cute girl. During his journey in Hell, the Helltaker finds several ancient inscriptions that were scattered in Hell which will be important later on for the Secret Ending.

Towards the end of the game, as the Helltaker and his brand new companions that he made in Hell successfully return home, Beelzebub then tells the players about the Helltaker's experience on gathering his demon harem and instead of a life full of happiness, it was a life full of suffering at the end of the day while also telling the players that people still need to spend their fun time despite their suffering they went through. In addition, she also tells the players that what had she told is a rather silly albeit a bit abhorrent tale because it's a story full of horrible people.

Throughout the game, the Helltaker can collect ancient inscriptions that were scattered in Hell which are revealed to be a secret ritual. If he decides to perform a ritual with those ancient inscriptions, a mysterious portal opens as Beelzebub appears from the portal. Encountering the Helltaker, she attempts to trick him by bringing him into the endless void by saying he would become the king of Hell while Beelzebub herself will be his humble servant.

Knowing that this is a trick from Beelzebub, Lucifer warns the Helltaker about the banishment portal he had opened and despite being found out, she seemingly had a cordial conversation at first with Lucifer until it was revealed that Beelzebub herself is an extremely powerful demon sealed by the previous Hell Prosecutor, Justice, due to the unspeakable atrocities she had committed in the past.

In addition, Lucifer also warns the Helltaker that if he stepped towards the portal, his soul would be imprisoned too and madness will wait for him there in which Beelzebub responded by saying that there's no madness, only darkness, and loneliness in the abyss. When Lucifer attempts to close the portal after dinner time is done, Beelzebub then made a vow that she will get out from the banishment portal someday.

If the Helltaker decides to ignore Lucifer's warnings and step through the portal with his own volition, he then experiences all of the extraordinary sickness known to man while ending up not dying because the concept of death didn't exist in the void. As Beelzebub finds the Helltaker in the void, she is surprised as she changed her form into becoming a rather cute and refined woman to accompany the Helltaker in the end.

After encountering the Helltaker in the endless void, he decides to give Beelzebub pancakes while in turn, she then tries to become a tour guide for him so that they could travel around her castle that she had made because being banished in the void ended up making her seeking strange hobbies.

As the story reaches its end, Beelzebub apologizes to the players about the self-insert that she inserted to the story proper as she couldn't help herself. She muses over the possibility of the audience asking about the Helltaker's fate, preferring not to answer the question because either Beelzebub is talking to herself by saying that the Helltaker doesn't exist or saying the audience who listened to her story is/are the Helltaker(s) themselves. As a result, Beelzebub concludes the game's story by saying some questions are best left unanswered.

In the comics, it is shown that both Helltaker and Beelzebub are having a sweet date together in her castle as the two were eating pancakes. As Beelzebub asked Helltaker about the different kind of pancakes that he ate, the latter then offers her said pancake which is filled with Quark Cheese despite Beelzebub's preference for chocolate pancakes in which Beelzebub agrees. As Beelzebub ate the pancake, she then emits a purple poisonous saliva when she tastes it.

After Beelzebub was introduced by a new device that Helltaker owns, revealed to be a mobile phone, Beelzebub becomes intrigued with it because of its ability to witness event and recreate them in visual form which is revealed to be creating videos as Helltaker put it. Being surprised that his phone still works in the Abyss as Helltaker attempt to open a door to a certain room and Beelzebub attempts to start the phone, Helltaker then tells Beelzebub to start the phone by touching the circle in the middle. As Helltaker was attacked by the strange creature behind the door, Beelzebub then recorded Helltaker's suffering in joy for entertainment purposes. 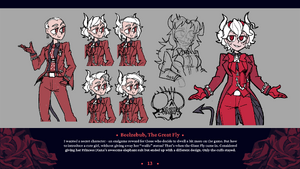 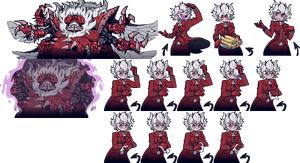 Beelzebub's in-game sprites.
Add a photo to this gallery

Retrieved from "https://villains.fandom.com/wiki/Beelzebub_(Helltaker)?oldid=4340670"
Community content is available under CC-BY-SA unless otherwise noted.