Beelzemon, also known as Beelzebumon in Japanese, is a major antagonist in Digimon Tamers, but later turned to the good side to help the Tamers. He is also a minor antagonist in the video game Digimon World Data Squad, in which he is not redeemed.

Beelzemon is the Mega form of Impmon. Beelzemon's name is derived from Beelzebub, the Hebrew word for "lord of the flies" and a word which is often synonymous with the devil. The red scarf tied around his arm is residual from the neckerchief he wore as Impmon.

Beelzemon is a power-hungry, cold-hearted monster that wants nothing more than to gain more power. He is very murderous, as he killed several Chrysalimon and Leomon in order to absorb their powers. He shows no remorse for his wrong-doing until he realized that after the epic battle with Gallantmon, he was nothing.

Beelzemon’s personality changed later on in the series when he redeemed himself to help the Tamers defeat the evil D-Reaper. Even the Tamers (especially Jeri) pardoned him for his earlier crimes.

Beelzemon first appears when Impmon accepts Caturamon's offer. With this new power, Impmon is able to warp digivolve into his Mega form, and Beelzemon was born. He is also granted control over a motorcycle that had previous controlled Guilmon. Calumon is the first Digimon he encounters when he briefly stops his motorcycle in front of the fatigued Digimon, however Calumon does not recognize him as Impmon and asks him for help. Despite Calumon's pleading, Beelzemon leaves him behind.

Later, he tests out his new abilities on a swarm of Chrysalimon. After obliterating a few dozen, the rest digivolve into Infermon with Calumon's power. However, Beelzemon still defeats it and finally gets the chance to absorb data, before being approached Caturamon who told him now it was his turn to uphold his end of their bargain.

He attacks the Tamers, and Renamon is able to recognize him as Impmon. However, the ensuing battle is interrupted by a fierce storm created by the reactivation of the unstable Juggernaut program.

Beelzemon appears again at Digimon Sovereign Zhuqiaomon's Southern Gate to hinder Takato Matsuda and his group. During the following fight, Beelzemon's lust for power quickly overtakes him. Terriermon becomes Rapidmon and attacks Beelzemon with his Rapid Fire attack, but got blasted away by Beelzemon's Double Impact attack. Guardromon and Kyubimon also attacked Beelzemon. Beelzemon attempts to finish off the weakened Kyubimon, but suddenly got pulled back by Leomon, questioning him that was it worth having the power he has to hurt the children. Beelzemon tells him off by he dosen't know anything, only to be punched by Leomon. He then explains to him that having power he had was not meant to be strong, and he will not allow Beelzemon to hurt the children. Fumed at him for telling him off, Beelzemon struck Leomon in the stomach, killing him and absorbing his data, leaving Jeri sobbing with sorrow. Takato, fueled by rage, yells at Beelzemon that he will pay for murdering Leomon, and WarGrowlmon furiously attacks Beelzemon, in an attempt to tear the demon apart with his razor teeth, only for him to push WarGrowlmon back. Takato then forces WarGrowlmon to dark Digivolve to Megidramon, born from Takato's anger and rage.

After WarGrowlmon Dark Digivolved to Megidramon, he attacks Beelzemon by wrapping him with his tail and attempts to devour him at close range, only for Beelzemon to seize him with his hands to prevent the dark dragon from eating him. At first, Megidramon seems to have the upper hand, but when suddenly Makuramon approaches Beelzemon, calling him pathetic and pawn never meant to understand, Beelzemon kills the annoying monkey, absorbing his power (as well as absorbing Rapidmon and Taomon's power too). This allowed Beelzemon to regain his strength and push Megidramon back, giving the dark dragon several blows to the jaw, and defeating him with a mighty kick.

However, after an epiphany, Takato and Guilmon are able to biomerge and form Gallantmon, who is an even match for the empowered Beelzemon. Nevertheless, Beelzemon soon gets the upper hand again when Caturamon appears to attack Lopmon for her betrayal of the Sovereign. Gallantmon destroys the last of the Devas, but Beelzemon sneaks up and loads Caturamon's data, gloating that the Deva got what he deserved. With this power boost, he nearly slays Gallantmon, until Guardromon distracts him with a Guardian Barrage, and Gallantmon is able to finally defeat Beelzemon with a Shield of the Just attack. But when Gallantmon was about to finish him, he is quickly stopped by Jeri, pleading him to spare Beelzemon's life.

After his merciful reprieve by Jeri's hands, Beelzemon, shocked and seemingly emotionally drained, reflects on the events in his life that led up to that point and wanders off. He aimlessly trudges through the digital wasteland with the image of the heartbroken Jeri haunting his mind, devoid of any of his former bloodlust or even the will to live. This left him vulnerable to the revenge of the Chrysalimon he'd previously terrorized, who, upon discovering him, drained him of his energy and left him behind as a beaten and defeated Impmon.

When the D-Reaper attacks Shinjuku, Impmon heads toward battle, and his determination causes him to digivolve once again to Beelzemon. A toy gun, given to him by Ai and Mako, becomes energized by his Mega form, and transforms into a huge blaster known as the Death Slinger, and Beelzemon finishes his digivolution into Beelzemon Blast Mode. In Blast Mode, he is virtually identical to before, however, black wings sprout from his back, his eyes turn green (the same shade as Impmon's), the Death Slinger is mounted onto his right arm, and several parts of his clothes and gloves turn a much lighter shade of grey with the metallic pieces, originally tarnished in appearance, turning to a light silver.

Through the rest of the series, he becomes more accustomed to his new form and more passionate and dedicated to saving Jeri. He was turned to the good side and the Tamers finally respected Beelzemon and forgave him of his past crimes. Most of his appearances in this form involve his attempted rescues of Jeri, as he deeply wished to atone for the misery his actions caused, even though he viewed what he did as unforgivable.

The last time he takes this form during the main series is during his and Calumon's rescue mission of Jeri. During their mission, they are attacked by some of the D-Reaper's bubbles, and Impmon digivolves to Beelzemon Blast Mode to destroy them. He then uses his guns to get Calumon into the Kernel Sphere before he is captured by the sphere, put into corded restraints, and knocked out. He is later released and forcibly ejected from the Sphere because he'd come too close to breaking free from his binds. He teams up with Gallantmon and Grani to break back in and free Jeri, and when Gallantmon and Grani successfully destroy the Gatekeeper, he tries to break into the Kernel Sphere with brute strength alone. The direness of the situation causes him to tap into Leomon's data within him (and considering the fact that an image of Leomon seemed to appear over him at the time some speculate that Leomon's spirit helped him), and he uses Leomon's Fist of the Beast King to break in. However, this has the unfortunate adverse effect of terrifying Jeri, as it was a cruel reminder of what he did to her partner, and thus she rejects his help until she realizes his good intentions, but by then the hole closes up and its too late for him to save her. Beelzemon, who at the time was distracted by his rapidly increasing desperation to save Jeri, is soon caught off guard by an attack by the D-Reaper and falls down towards the chaos mass. Fatally wounded, his data begins to disperse from his body and it appears that he has no hope of survival, but he is narrowly saved by Grani and de-digivolves back into a badly injured Impmon.

After the D-Reaper's defeat, he was forced to return to the Digital World with the others, but they were able to return. Six months later, as Beelzemon, he helped them fight an army of Parasimon that threatened the world and possessed a Locomon. After the Parasimon were defeated, Impmon attended Rika birthday party.

In Digimon World Data Squad, Beelzemon is one of the Seven Great Demon Lords. He was created by the Code Key of Gluttony and a gluttonous person, and is the fourth member that DATS encountered.

Since Beelzemon absorbed some Data of defeated Digimon, he learned their main attacks; 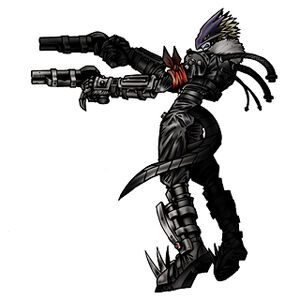 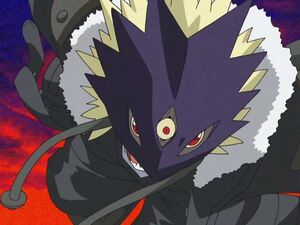 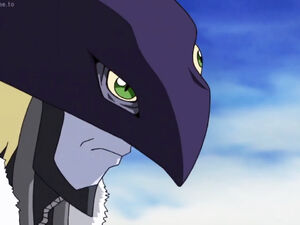