To ensure J.P. is forgotten by his friends (failed).

Beetlemon's Shadow, also known as ShadowBeetlemon, is a minor villain in Digimon Frontier.

He was voiced by Steve Blum.

After Volcamon was defeated by Beetlemon, J.P.'s shadow was born. He taunts J.P. about that Takuya, Zoe, Tommy, and Koji didn’t care for him. J.P. then remembers back when he was with his “fair weather” friends at school on a rainy day, showing magic tricks and trying to offer chocolate to his friends, but paid no attention to him, and was even denied an umbrella, and his shadow tells him they don’t like him, causing J.P. to wail in agony. Beetlemon gets more angrier and attacks the shadow, whilst continuing to taunt him.

Suddenly, a coliseum rises from the ground and the shadow reveals himself as a dark physical copycat Form of Beetlemon. Then he created multiple illusions of J.P.'s friends, hurling insults at him. Beetlemon fights with the shadow Beetlemon, but was invulnerable against his attacks, and warns J.P. that he will destroy himself if he destroyed his shadow. The shadow Beetlemon easily overpowers Beetlemon, reverting back to a badly injured J.P.

Takuya, Zoe, Tommy, and Koji suddenly appeared and found J.P. in the coliseum. The shadow Beetlemon threatens to dispatch J.P.’s friends as soon as he finished him. Angrily, J.P. Beast Spirit evolves into MetalKabuterimon, albeit the shadow was not impressed and slide evolves into a copy of MetalKabuterimon himself. MetalKabuterimon finally manages to finally destroy the shadow Beetlemon for good with his Electron Cannon attack. J.P. was reunited with Takuya, Zoe, Tommy, and Koji, only for the reunion to be cut short by some hands pulling J.P. and his friends into different dimensions, separated from each other once again. 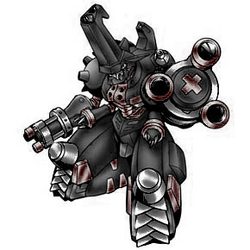