???
The Begnion Senate is an antagonistic faction in Fire Emblem: Path of Radiance and Fire Emblem: Radiant Dawn. They rule the country of Begnion alongside the Empress, and although the Empress herself is kind, most of the senators plot to usurp and kill her for their own benefit.

Lekain is the leader of the corrupt Begnion Senate and the secondary antagonist of Fire Emblem: Radiant Dawn, he attempts to overthrow Begnion's current empress, Sanaki. He is the one that tells Sanaki that she is not the true apostle. He manipulates other countries by using blood contracts. He is killed in the Tower of Guidance by Yune's army. Lekain was also whom Astrid, a Crimean Royal Knight, would have been married to, if she had not fled.

He is a fervent partisan of the total extermination of the Laguz, a species of people that can transform into animals.

Hetzel is a senior member of the Begnion Senate who appears as a faint-hearted old man that, despite his opposition to the Empress Sanaki, does not appear to be an entirely antagonistic character. As the purchaser of the heron prince Rafiel, Hetzel pays an exorbitant price only to return the heron to Serenes Forest following the recovery of his health.

In Fire Emblem: Path of Radiance, he appears in the court game of "wit and words" that the Apostle plays with Ike upon his arrival in the Mainal Cathedral of Sienne. He makes no further appearance, though secretly he saves Oliver following his defeat at the hands of the Greil Mercenaries.

Numida is a high-ranking Begnion senator serving during the events of Fire Emblem: Radiant Dawn. He was tasked with ruling Daein following the Crimean victory in the Mad King's War, though he proved abusive of his power, sending able-bodied young men to work without pay in labor camps. After the Daein Liberation Army begins to emerge victorious against the Begnion Occupation Forces, Numida disavows all knowledge of these abuses, blaming Commander Jarod in his stead.

Valtome, is Duke of Culbert and a high-ranking member of the Begnion Senate serving during the events of Fire Emblem: Radiant Dawn.

Senator Valtome is given command of the Begnion Central Army in the stead of General Zelgius sometime after the beginning of the war between the Begnion Empire and the Laguz Alliance by order of the Begnion Senate. At this time, the Apostle Sanaki and Chancellor Sephiran have already been dethroned and imprisoned, respectively, and are powerless to halt this action.

His weapon of choice is the twisted light magic Valaura, which he has presumably named after himself, and which poisons anyone unfortunate enough to come under its glare on contact.

Valtome is greedy, arrogant, and has a strange reoccurring laugh, transcribed as "uwee hee hee!", and he claims to be "divinity itself" upon engaging party members in battle. He is, however, shown to be a coward when he runs from the combined forces of the Greil Mercenaries and the Crimean Royal Knights.

Oliver is a senior member of the Begnion Senate who was believed to have been executed for crimes against the state following his defeat at the hands of the Greil Mercenaries in Fire Emblem: Path of Radiance. He was deeply involved in the Laguz slave trade prior to his defeat in Serenes Forest, having purchased Prince Reyson for an exorbitant fee from King Naesala of Kilvas as though he were but another art treasure for his vast collections.

During the events of Fire Emblem: Radiant Dawn, it is discovered he was rescued by Duke Hetzel and that he has since been recovering at his estate in the Dukedom of Tanas. He is a researcher, and self-proclaimed protector, of beauty, and has amassed an enormous collection of art treasures, the likes of which he appears to believe only himself capable of appreciating. Despite being old, bald, and possessing an unsightly amount of weight, he is also quite vain, once commenting that Reyson struck his 'beautiful" nose.

He is one of few Fire Emblem boss characters that are recruitable (though only in Fire Emblem: Radiant Dawn). Oliver will act the turncoat upon encountering Rafiel, claiming that it is his duty as a defender of beauty to guard the heron prince. At the end of the game, he becomes a benefactor of artists, especially those who paint him, further showing his lust after art and egocentrism. 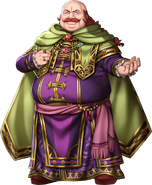 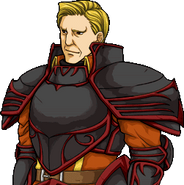 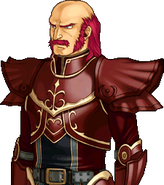 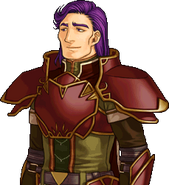 Sergei
Add a photo to this gallery

Retrieved from "https://villains.fandom.com/wiki/Begnion_Senate?oldid=4188605"
Community content is available under CC-BY-SA unless otherwise noted.