Corrupting and Terraizing anything it can.

The Behemoth is the final boss in SteamWorld Quest: Hand of Gilgamech.

The Necromonicog was stated to have been created by the gods, namely the goddess of deceit by the souls of alchemists and warrior of old, and put into a Behemoth to terrorize the land. it was later defeated by the Ancient Hero Gilgamech where the Necronomicog was placed in an unknown land and the Behemoth's body had a castle built on top of it.

The Necronomicog, after leaving its original host body took control of the land it was in now and became the Téras Koloss. This land it now lives in is now called the Cursed City, and the inhabitants are now the Druids.

When the heroes when to interrogate the Archdruid Bob IV, they noticed Téras Koloss who took Bob's life and later fought against the heroes. It was later destroyed and the heroes took the Necronomicog, only for the Void army and Gilgamech took the relic and zapped the heroes. The Necronomicog later had shadows of three of the past foes that the Fellowship has faced, going under the names 'Shadow Headmistress', 'Shadow Dragon' and 'Shadow Koloss'. All three of these forms were defeated, only for a version of the Fellowship themselves to appear to fight against their original counterparts, these being the 'Reckless Knight' (Armilly), 'Arriant Alchemist' (Copernica), 'Brooding Hermit' (Galleo), 'Repressive Sister' (Tarah), 'Burdensome Brother' (Thayne) 'Wayward Spirit', 'Demon Warrior' & 'Jovial Deity' (Orik). These forms were vanquished however and the original Behemoth itself was awakened by Gilgamech and defeated him in one paralyzing electrical attack. The Heroes themselves later fought against the Behemoth, traveling to three different locations and after a long difficult battle, the Behemoth was once again defeated and the Necronomicog vanished without a trace. The Behemoth's body was used as a Minigolf hole.

Like all characters in SteamWorld Quest: Hand of Gilgamech, the Behemoth uses cards in its various battles, all of its forms have different forms of cards however.

Shadow Forms: The shadow forms use the same attacks and cards as their original counterparts, such as Double Edge, Poison Breath, Time Lock & Jai Cut. 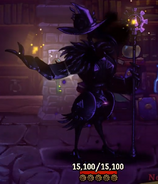 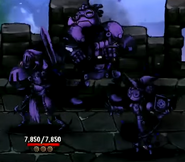 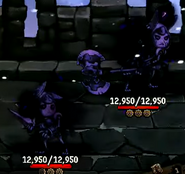 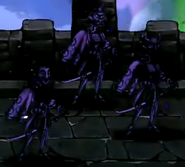