Escalating the Jakarta criminal underworld and its corruption.

Manipulating the nefarious criminals into colliding against each other by killing their assets.

To manipulate Uco into deteriorating Bangun's reign to overthrow him and Goto (partly succeeded).

To complete his nefarious coup on the Jakarta criminal underworld and kill Rama (failed).

Bejo is the secondary antagonist of the 2014 crime drama film The Raid 2: Bernadal.

He is an ambitious self-made Jakarta gang lord who staged a nefarious coup to overthrow the local crime kingpins Bangun and Goto by manipulating the former's son Uco into perpetuating a war between the two, and later affiliates himself with corrupt police commissioner Reza. In the process of doing so, he orchestrated the events of the film upon killing Andi - the ex-right hand man of his associate Tama Riyadi and the younger brother of the film's protagonist, Rama.

He was portrayed by Alex Abbad.

Bejo's father was a poor man who made boot polish which become rich and Bejo started his own restaurant. On this occasion, he began ties with Tama Riyadi - the main antagonist from The Raid - about a discussed coup against crime boss Bangun in order to become top of leunge before Andi heard and called his brother Rama, who had taken Tama's evidence to the police station. Having heard of Andi's betrayal and Tama's death, Bejo later has Andi captured before taking him to the fields outside of Jakarta, where Bejo plans to have Andi killed there. Bejo begins to tell Andi the history of ambition and on how he himself became lecturing him over his ambitiousness, he then proclaims that Bangun once allowed Tama to be the man who he was until he teamed up with Tama to overthrow Bangun. It is then revealed that Andi was given a chance of hope months ago, but when it came to choose between Bangun and Bejo, Andi chose Bangun, which is the possible main reason that led to Tama's death in the first place. Bejo then nods The Assassin to walk up to Andi with a shotgun before proclaiming that the full circle of "Ambition and Limitation" begins once more, meaning that Bejo will now have to begin a new plan to easily overcome Bangun all over again. Andi begs for his life, but Bejo ignores him and just says "Don't mind me". The Assassin then kills Andi and buries his body in the fields.

Rama, Andi's brother, later learns of Andi's death and is informed that Bejo killed him. This leads Rama to go undercover in order to overcome both Bangun and Goto, whilst exposing Reza and his corrupt crimes at the exact same time. When Rama refuses to beat up the son of a politician that would lead to his own arrest, Bunawar, Rama's informant who is a corrupt chief officer of his police division, makes Rama do so when he informs him that the politician is a key player for Bejo.

Two years ago, Rama then enters Bangun's office, but not after Bangun has finished his meeting with Goto. On this occasion, Bejo is mentioned once again. In reality, the meeting between Bangun and Goto was about the uprising of Bejo, who was revealed to have taken out Yudi's group and making a huge threat against both Bangun and Goto. Despite Goto's worries that it could be nothing that will back Bejo down, Bangun assures Goto that he and his men will monitor the situation and keep sight of Bejo, and if Bejo crosses the line then Bangun will take care of Bejo, the two then shake their hands.

After nearly a whole hour of the film, Bejo is seen again inside his restaurant. On this scene, Bangun's son Uco had a meeting with Bejo at his restaurant about the plan to steal Goto's territory and help Uco rise to power once he becomes the top crime boss against his own father and, thus, starting a war between the Goto and Bangun clans once again after years. During the meeting, Bejo seems not too concerned from history and tradition, only ambition. By that notice, Bejo sees Bangun as a week businessman whilst Goto drowns Reza and his men with whisky and strip clubs. It is then assumed that Bejo plans to partner with Uco in order to convince Reza to turn against Bangun and his family. To make sure that Uco (who was quiet an only listened at first) accepts his offer, Bejo gave a present to Uco - killing 5 men (with tornado tattoo) by sharp scalpel. As Uco kills each men, Bejo requests the death of a loyal member to Bangun, but not just a foot soldier. When Uco questions this, Bejo then plans that he has all ready had someone in his mind. The two are seen outside where, unkowablest to them, Rama has put wire on them and shows anger on Bejo after seeing the man who killed his brother. Rama is even more shocked to see Uco and Bejo shaking hands as they plan for what comes next. Later on, Bejo is seen sitting in his car as a wounded Prakoso is seen after killing all of Bejo's men after spending time with Uco in a strip club, The Assassin then successfully kills the wounded Prakoso before news of his demise is spread towards Bangun, who refuses to retaliate against Goto and only plans to protect Prakoso's wife and child in order to honor for his death. Having heard from Uco that their plan turned to a bust, Bejo then sends his three assassins, including The Assassin again along with Baseball Bat Man and Hammer Girl, to eliminate loose ends from the Goto family. He is seen in the same fields as Rama died where The Assassin kills one of Goto's loyal ally, meanwhile Baseball Bat Man and Hammer Girl also kill their targets, along with Goto's henchmen in the process.

Even that plan failed when Bangun takes responsibility for some actions before learning of Uco's betrayal, but this didn't matter when Bejo is seen invading Bangun's headquarters with The Assassin and his own henchmen aside him. He shows delight when Uco kills Bangun and ends up wounding Eka, Bangun's translator and Uco's best friend, in the process. Bejo then prepares to shoot and kill Eka when Rama (allied as Yuda) gets past Bejo's henchmen before kicking Bejo's gun away, stopping him from killing Eka in the process. Rama then prepares to fight Bejo when The Assassin suddenly attacks Rama, who tells Eka to run. Eka flees while Rama fails to even lay a hand on Bejo as The Assassin knocks him unctuous. Bejo then ask Uco on what he wants to do about Rama, when Uco makes no response, Bejo orders his men to take Rama away and have him killed later on. This fails when Eka rescues Rama after the two subdue Bejo's henchmen. Meanwhile Goto learns of not only Bangun's death, but also Reza's betrayal when he is informed that Reza is off to meet with Bejo in order to discuss their plans to overcome Goto's syndicate. Goto is furious to learn of Bejo's cause and demands to take care of him imminently. Goto is then told that Bejo is not alone and that Uco has joined forces with him after taking out Bangun. Goto, now knowing that Bejo has serious numbers on his side and that he is a major threat, declares war on Bejo's gang and Reza's crooks in order to start over again.

After Uco kills own father to get power, he met Bejo and Reza after learning that Yuda is actually Rama. Uco remains quiet as Bejo talks to Reza on how they will overcome Goto and his family once they claim Bangun's territory before taking the second step to steal Goto's own land. As Reza plans to gain Uco's attention, Bejo is told that Rama has escaped his demise and that he is coming up inside his restaurant to stop him. Bejo sends everyone, including his three assassins, to kill Rama. When Reza questions if Bejo is ok, Bejo assures Reza that there is nothing to worry about, he then continues to speak to Reza about their plans against Goto when Bejo accidentally drop his cane. On this occasion, Uco notices a tattoo on Bejo's wrist, which was the same tattoo Benny before being killed. Uco then learns that Bejo was the one tried to have him killed in prison. And when that failed, he then ordered a cover up and planned to have an alliance with Uco before making it no so useful anymore after Bangun's death, Uco then assumes that Bejo and Reza will spark wars and that Bejo will try to have him killed later, but not after placing Goto and his family as his next target, before taking all the land for himself. Their meeting was soon cut short however when Rama, having survived after killing all of Bejo's Gang, including the three assassins, interrupts the scene. Rama kills two of Bejo's goons before fighting a third, as he begins fighting, Bejo rushes towards the bar and retrieves a shotgun for Reza, he throws it to him, only for Uco to claim it first and shoot Reza, killing him. Bejo ignores this however when he retrieves a second shotgun and accidently kills his henchmen. He shoots Rama several times, all missed but barley wounding him also. Rama takes cover around the sofa while Bejo waits to make a move. Bejo is about to react when Uco suddenly shoots Bejo twice, the first in his leg and the second at his shoulder, fatally wounding him also. Uco then walks towards Bejo's corpse and drops a wire on him, as the camera turns to a blooded and dying Bejo. Uco then loads the shotgun and, with Bejo unable to grab the shotgun while he lays helpless on the floor, shoots Bejo's face off at point blank range, killing Bejo and thus, avenging Andi's death for some reason.

The deaths of Bejo, Reza, Bangun, Eka, Benny and his four prison friends would all then be avenged when Uco, choosing to kill Rama when realizing he is now finished for good, is finally killed by Rama, having stabbed him in the heart. Later Goto's gang and Bunawar himself would later learn of Bejo's death, more of which sooner. 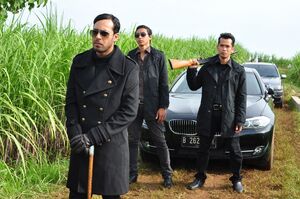 Add a photo to this gallery
Retrieved from "https://villains.fandom.com/wiki/Bejo?oldid=3774681"
Community content is available under CC-BY-SA unless otherwise noted.