Get the most fashionable clothes for every time period.

Bela and Lugosi are two vampire sibling thieves, always seen together; and also, two of the many villains that the agents Coqueta and Audaz fight in the commercials used to advertise Coqueta & Audaz line of shoes for toddlers and kids.

Like most commercial villains, their objective is closely tied to the product they're advertising. These "trend-sucking vampires" have been looking through the ages for the ultimate fashionable clothes and accessories when they stumble across Coqueta & Audaz's shoes, they believe their search is finally over, as they had never seen something similar before. They steal the shoes as well as any kind of clothes that match them, this gives the heroes time to try to stop them. After a fierce battle, they use the "Flechas de Luz" (Light Arrows, an actual plastic fluorescent item that comes with a purchase of a pair of shoes) and defeats them. Bela goes after Coqueta to fight her as Bela tries to take Coqueta's bracelet and claw her to nothing.

Their strongest trait is their speed, they attack with claws and fangs in almost unavoidable moves. While they hold many distinctive vampire characteristics they also seem to have ghost-like powers namely floating, disappearing, and whipping with their ghost tails. 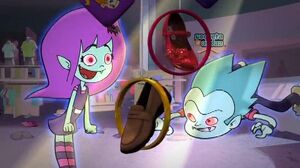 Retrieved from "https://villains.fandom.com/wiki/Bela_%26_Lugosi?oldid=3052751"
Community content is available under CC-BY-SA unless otherwise noted.